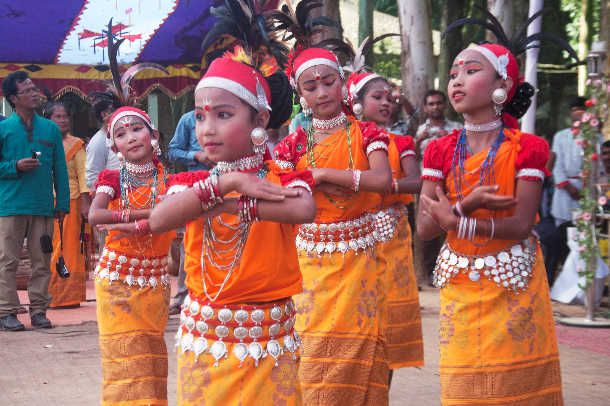 Ethnic Garo Catholic girls perform a traditional dance during harvest festival in 2015 at Tangail district. Ethnic groups have blended their culture and tradition with Christmas celebrations. (Photo by Stephan Uttom/ucanews.com)

Christmas is a time of relaxation and joy for Susmita Ruga, a Catholic from the Garo tribe of predominantly indigenous Mymensingh Diocese in northeast Bangladesh.

The Garo are a matrilineal minority, in which children take the surnames of their mothers, living in the Indian states of Assam and Meghalaya as well as in Bangladesh.

Susmita, a university graduate based in Mymensingh city, gets a week or so break from her studies during the Christmas period.

"I go home and join my family and friends in decorating the church and our home," Susmita told ucanews.com. "We practice and participate in our choir, prayer and caroling."

Besides a spiritual renewal for the faithful, Christmas boosts fraternity among Garo villagers, she said.

Every village hosts a traditional get-together in one house, where a cultural program and shared meal strengthens community bonds. At both tribal and religious festivals, pork and a rice beer called Chu is consumed.

"Chu consumption is purely traditional for Garo people, so no one takes it for addiction and no unpleasant incident occurs — Garo people respect their culture and traditions more than their lives," Susmita said.

During festivals, most Garo women wear dokmanda (a traditional Garo dress) and both men and women use ethnic ornaments including a headdress made of bird feathers.

Garo, who are ethnically mongoloid, make up majority of the more than 80,000 Catholics in Mymensingh Diocese.

In Muslim-majority Bangladesh, Christians make up less than half a percent of the country's more than 160 million people.

Most of the estimated 600,000 Christians are Catholics, spread over eight Catholic dioceses. Apart from majority Bengali Christians, nearly half of the country's Christians hail from various ethnic minority groups such as the Garo.

Christmas has an added significance for Bangladeshi Christians as it is the only Christian feast that enjoys a public holiday and is popular with all faiths and ethnic groups.

The capital, Dhaka, is home to the largest number of Christians, both Bengali and indigenous peoples. Most moved to the bustling city from the provinces to study, find jobs or engage in business.

However, during Christmas holidays, many head back to their provinces to celebrate with family and friends.

Hotels, restaurants and convention centers in Dhaka hold numerous Christmas parties that attract both Bangladeshis and foreigners, including state officials and members of the diplomatic community.

Christian groups organize Christmas fairs, carol competitions and other events. In cities and villages alike, Christians put up decorations and lights, and there are midnight Masses on Christmas Eve.

"Christmas means putting behind the old and welcoming new," he said. "People wear new clothes, prepare good food and share their joy with others."

Christmas for the poor

"Poor Christians put aside their life of suffering to celebrate the birth of Jesus," Bishop D'Cruze told ucanews.com.

A shortage of priests meant that about 30 percent of Catholics would not be able to attend a Mass on Christmas Day, so they would have special prayers instead, the bishop added.

To help cope with the winter chill, blankets had been distributed.

For Catholics in Chittagong Archdiocese, Christmas is overlapping with preparations for the celebration early in 2019 of 500 years since the arrival of the Catholic faith in what was then East Bengal, now Bangladesh.

This jubilee will be a special occasion to renew faith in Christ by thanking early missionaries and others who were martyred, said Archbishop Moses M. Costa of Chittagong.

Bishop Sourav Folia of the Protestant Church of Bangladesh said for both Bengali and indigenous Christians, Christmas blended cultural and religious fervor.

"Since Vatican Council II, Churches had made efforts towards 'inculturization' of traditional customs," Baskey told ucanews.com. "As a result, Santals have Sohorai and Baha — harvest and spring festivals — merged with Christmas and Easter Sunday."

However, he laments that due to merging, some traditional festivals have lost their original character.

Bangladesh is to hold a parliamentary election on Dec. 30. Campaigning has already triggered political violence, including deaths, and sparked panic among minorities, including Christians.