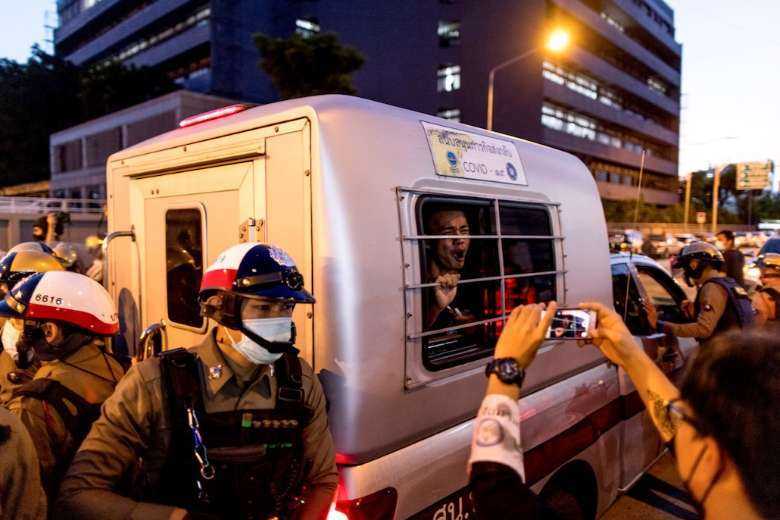 A man is detained in a police van at an Oct. 29 protest in Bangkok that led to two pro-democracy activists allegedly being tortured by police. (Photo: AFP)

Thai authorities have yet to investigate complaints made by two pro-democracy activists who were allegedly tortured by police while in custody last year despite repeated calls for justice over the 11 weeks since the incidents, rights advocates say.

Attasith Nussa, 35, and Weeraphap Wongsaman, 18, reported having been detained during an Oct. 29 protest at a police station in Bangkok where they were allegedly beaten by officers inside an interrogation room.

The two activists produced images of their injuries, including a badly bloodied eye, cuts and bruises, and posted them on social media.

The men said they had suffered these injuries while being interrogated over their role in the protest during which some demonstrators had allegedly set fire to a shrine outside the station.

“[One officer] dragged me on a wooden bench and slammed my head against it twice,” Attasith explained at the time. “He asked me, ‘Why did you come here and make a mess? Did you set fire to the shrine?”

Attasith said the officer had kept asking questions while physically assaulting him. “He hit my ribs and stomach with a wooden baton. After that, he grabbed my neck and choked me until I almost passed out,” he said.

They put me on a chair in an interrogation room and took my pants off. They burned the areas around my genitals with cigarettes and kicked my testicles

Weeraphap said he had endured a similar ordeal at the hands of several police officers that same day.

“Police officers punched and kicked me when they arrested me and brought me inside Din Daeng Police Station [in central Bangkok],” the teenager recalled, explaining that he, too, was being accused of having set fire to the shrine outside the station.

“I was handcuffed behind my back. They put me on a chair in an interrogation room and took my pants off. They burned the areas around my genitals with cigarettes and kicked my testicles,” he added.

The two men have filed a complaint with the police agency Department of Special Investigation and detailed their ordeals to several rights bodies.

However, their cases have yet to be investigated, according to the Cross Cultural Foundation, an NGO that has been assisting the two men in their quest for justice.

“Despite repeated requests, police have not provided Attasith with CCTV footage from the evening or the results of a medical check-up he was given before being released,” the foundation said.

“The officers he accuses of beating him remained on duty and there is no indication that an internal disciplinary investigation committee has been established,” it added.

Rights advocates say the cases are emblematic of endemic impunity within the ranks of the police, who have long been accused of using violence and excessive force against peaceful demonstrators.

The rights body cited the routine use of police batons, tear gas, water cannons, rubber bullets and live ammunition, and said numerous protesters, including minors, had been injured, some of them severely.

However, despite these well-documented instances of police brutality, no officers have been disciplined or charged, rights activists say.