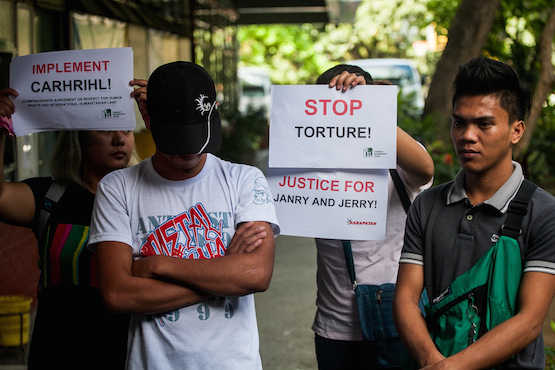 Farmers Janry Mensis (right) and 17-year-old Jerry file a complaint of torture with the Commission on Human Rights on March 2 against the Philippine army. It was the first documented case of torture allegedly committed by the military during martial law in Mindanao. (Photo by Mark Saludes)

A torture complaint has been filed against the Philippine military with the country's Commission on Human Rights for the alleged maltreatment of two suspected communist rebels in Mindanao.

The complaint is the first documented case of torture implicating the military since martial law was declared across the southern Philippine region last year.

Farmers Janry Mensis, 22, and 17-year-old Jerry (not his real name) of Maco, in Compostela Valley province, allege that they were tortured by soldiers after their arrest in November last year.

The farmers accused the military of abduction, illegal detention, torture and frustrated murder in a complaint filed with the human rights body this week.

Mensis said police arrested him and his companion on Nov. 28, 2017, in connection with a robbery. The pair were later handed over to the military.

Inside a military camp, the farmers claimed that they were repeatedly tortured for eight days to force them to admit that they were communist rebels.

They claimed that they were able to escape in December.

Major Ezra Balagtey of the military's Eastern Mindanao Command said his office has not received any report about the alleged torture.

"We have no knowledge of that incident, but we will conduct an investigation," said the military spokesman.

"If these allegations are true, then appropriate charges will be filed against the perpetrators," he told ucanews.com.

Human rights group Karapatan said the case is "a clear manifestation of the cruelty and fascist character of military rule" in Mindanao.

"[Martial law] promotes the culture of impunity — that's why state forces think they can just do anything to anyone and get away with it," said Karapatan secretary-general, Roneo Clamor.

Karapatan says it has recorded 87 cases of torture since President Rodrigo Duterte came to power in 2016.

The Promotion of Church People's Response, meanwhile, called on the rights commission to look into other cases that have not been documented.

"There might be similar cases that need attention," said Rubylin Litao, spokeswoman of the group. She said torture victims are usually afraid to speak out.

The Rural Missionaries of the Philippines, a Catholic Church group in Mindanao, is coordinating with human rights groups for possible assistance for the victims.

"We are saddened and alarmed," said Sister Elen Bernardo, coordinator of the group. "The victims must be protected while the perpetrators should not go unpunished," she added.