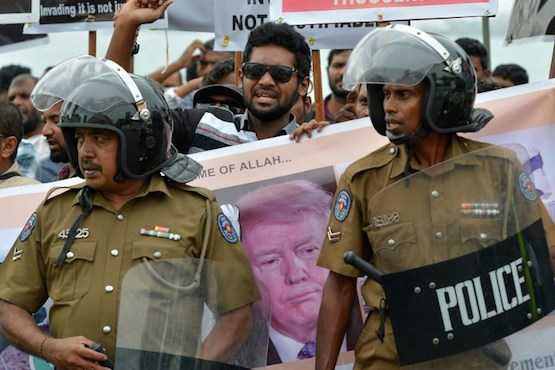 Sri Lankan police stand guard as activists shout slogans during a protest in Colombo on Dec. 12, 2017. Demonstrators in the country fear illegal police beatings when they are detained. (Photo by Shara S. Kodikara/AFP)

The 31-year-old was strung up and beaten relentlessly during a "routine" interrogation as police quizzed him about a robbery he claims he knew nothing about back in 2003.

Intent on bending him to their will, officers at Ankumbura police station in the ancient capital of Kandy allegedly stepped things up a gear by filling a plastic bag with petrol and tying it around his face.

The whole time blows kept raining down on him as the guards used their boots, fists and even cricket stumps to persuade him to change his statement, he says, wincing at the memory.

While this is not be a pretty picture, rights groups and survivors of police torture — not everyone escapes with their life, it seems — say the practice is becoming widespread if not institutionalized in Sri Lanka.

They claim the situation has worsened in recent years despite protestations by the government that law-enforcement agencies do not coerce or punish suspects in this way.

Even the Office of Missing Persons (OMP), set up in 2016, is concerned about the issue, and the UN has grilled the government over the mounting torture allegations.

Bandara has been recognized for his bravery but most are not so lucky.

He received an award for courage in the face of cruelty from the church-run Human Rights organization in Kandy on International Human Rights Day, which fell on Dec.10 last year.

His case against police brutality is ongoing but activists say don't hold your breath: Few victims see justice even though so many people have received beatings even for perceived minor infractions, they say.

Last year, two people died in police custody after they were arrested in February. The Asian Human Rights Commission documented nine extrajudicial killings and one attempt on a suspect's life for 2017 as a whole.

One of the victims was Gamini Edward, who died in Negombo prison on the west coast of Sri Lanka on Oct. 4 after he was detained in the nearby town of Divulapitiya.

The judicial medical officer of Negombo hospital cited internal injuries as the cause of death.

Kariyawasam Gamage, 39, was arrested by Nagoda police on Feb. 9 and died the following morning. Relations said his body was covered in bruises consistent with a severe beating.

Both are being litigated but legal eagles in this nation known for its lush tea plantations and pristine beaches doubt they will see justice.

When punishment is meted out against the police it tends to come as a slap on the wrist.

According to a report by the Ministry of Foreign Affairs, 33 officers faced disciplinary action last year while 100 were accused of assault and torture.

People expect the number of accusations, if not charges or sentences, to climb this year.

He organized a petition in 2016 urging Sri-Lanka's attorney-general to file cases from the last decade retroactively under the Torture Act.

"We filed Bandara's case as a fundamental rights case and took it to the Supreme Court," the priest told ucanews.com.

"The problem is most of the records are stored by the police, so it's not hard for them to alter them." Chamila Bandara is pictured with priests, nuns and human rights activists at the award-giving ceremony. (Photo by Niranjani Roland)

He uses Bandara's case to illustrate his point: Bandara claims he was detained for one week but police records show otherwise.

Father Manatunga knows he is fighting an uphill battle but it may not be an impossible one — as his track record attests.

"We have already won one torture case against the police," he said.

"Rohitha Liyanage was tortured by two officers in 2005 and they were handed jail terms of seven years by the Kandy High Court a few years ago."

He said police try to "break" suspects and force a confession by taking them to the limits of human endurance and then dangling a pen and blank sheet of paper in front of their face.

"Officers need to be trained in the proper way to conduct an investigation, a way that doesn't include torture," the priest said.

The Sri Lanka police have a "zero-tolerance" policy when it comes to physically harming or torturing suspects, according to Ruwan Gunesekera, a spokesperson for the national police force who holds the rank of assistant superintendent.

Regular workshops are held to ensure officers remain well educated on how to handle detainees, among other issues, he added.

"We have instructed all of our officers to take immediate disciplinary action against anyone linked to episodes where torture was involved," he told ucanews.com.

"Our records show the number of such cases is shrinking."

Father Manatunga was not convinced. He doesn't see the workshops having much impact on an ingrained mindset.

Sri Lanka implemented the UN convention on the Prevention of Torture in 1994. Its constitution states that no person shall be subjected to torture or degrading treatment.