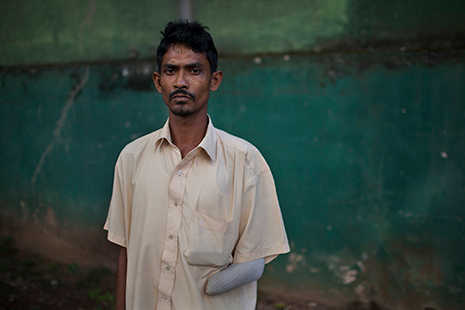 Chaminda Priyantha Kumara, a 32-year-old amputee, was about to begin a 130 km journey to deliver heart medication to his wife when he was surrounded by men at a bus stop in Kalutara, accused of theft, attacked and then arrested by police.

Kumara, who was initially accused of stealing a mobile phone and 680 rupees (about US$5.20), says that on the night of May 21 last year and the following day he was brutally tortured, publicly shamed and accused of additional crimes including petty theft, burglary and murder.

At the Kalutara South Police Station, he was stripped and chained to a wooden table. “One policeman choked me with a wooden pole and another policeman beat me on the soles of the feet. While I was laying on the bench, they used a carpenter’s mallet to repeatedly smash my testicles,” said Kumara, who lost his left arm below the elbow after an electrical accident in 2008.

“Already I am missing an arm, so they threatened to cut off another piece of my arm.”

Kumara repeatedly denied the allegations leveled against him, prompting investigators to experiment with various other tactics.

“Someone tied a cloth over my face, covering my mouth, nose and eyes. Another policeman attached a hose to a tap and then put it at my mouth. I couldn’t breathe because of the pressure of the water,” he said. “I was struggling so much the table fell over twice.”

As the day wore on he was beaten on the stump of his amputated arm, dragged around the room with a hose tied around his neck and beaten savagely with wooden clubs. At one point, Kumara says that a high ranking police official jumped from a windowsill and landed on his chest.

According to rights monitors, such incidents are common in Sri Lanka even during investigations of minor offenses.

“The police do not know how to investigate a crime,” said Kingsley Karunaratne, Administrative Secretary of the Rule of Law Forum, which is affiliated with the Asian Human Rights Commission.

“So they will take these innocent people to the police station and hammer them until they confess,” he said.

“Sri Lanka police never practice torture,” said police spokesman Ajith Rohana. “They are taught to not torture under any circumstances.”

He went on to claim that police training “incorporated all human rights concepts” into its curriculum, citing the Universal Declaration on Human Rights, the International Covenant on Civil and Political Rights and the Committee Against Torture.

“We use modern [investigative] techniques such as DNA evidence, telephone analyzing, video evidence,” he added.

But Kumara’s story is not uncommon among those arrested for minor crimes.  Over a period of several days ucanews.com spoke with a half dozen individuals who had experienced a range of torture and police brutality.

On July 10 of last year Ukkuwattage Padmasiri, 38, and his stepfather A.D. Karunaratne, 45, were taken by four policemen to a jungle area near their homes where they were tied to a rubber tree and beaten.

“They accused us of making illegal arrack,” said Padmasiri.

Padmasiri says that despite searching his family’s properties and finding nothing illicit, the police officers later presented he and his father-in-law with four buckets of arrack, a popular local liquor. The police then alleged that the alcohol had been produced illegally by the men.

“We were beaten repeatedly and told to fess up to being the owners of the arrack,” said Padmasiri.

The pair were arrested and forced to carry the buckets of arrack for about four kms, said Padmasiri, adding that he suspects the harassment is connected to a dispute between his family and a local businessman who wants to build a road through their property.

“They might plant heroin or cannabis or illicit moonshine”, he said. “Sometimes they introduce firearms.”

In Kumara’s case, he was first accused of stealing a mobile phone and 680 rupees from a purse at the bus stop. Then, later at the police station, he was also accused of burgling local shops, stealing from his workplace and even accused of murder.

After the torture ended, Kumara was escorted by police to several shops in Kalutara where officers informed the businesses’ owners that Kumara was the one who had burgled their shops. Then he was paraded around the Kalutara General Hospital where he worked as a substitute health assistant in the lab. Kumara’s co-workers were told by police that he was responsible for any thefts that had occurred in the hospital over the previous year and a half.

A system without justice

According to monitors, the factors driving these trends run much deeper than the country’s police force.

In separate interviews, Perera and Karunaratne explained the various loopholes that police exploit to avoid being accused of torturing suspects.

Before a suspect can be remanded into custody he or she has to be examined by a medical officer and presented before a magistrate.

“The police know the corrupt doctors,” said Perera and get them to sign legal forms indicating that a suspect is physically “fit to remand” even if the individual in question has been tortured and exhibits visible wounds.

Karunaratne says that some medical officers are intimidated or coerced into acquiescing to such police demands.

Police often wait until night when the magistrate has already gone home, then they will get the “acting magistrate” to sign off on remanding a suspect to jail for 14 days without actually ever physically seeing him or her, said Karunaratne.

Two weeks later, by the time a torture victim is examined by an impartial physician, most of the “bruises or contusions” have healed, said Perera.

“We see it not [only] as a problem of the government but also with society,” he said. “If some criminal is assaulted even the people justify [it] and so we have to change the people's attitude as well.”

Police reforms are definitely required, he said, adding that they would “aim towards” carrying out educational programs to address the issue of torture.

“Sri Lanka does not have a commitment to eradicate torture,” said Weliamuna.

“Political will and re-establishment of Rule of  Law are key” to putting an end to it, he said. “It is important to have a  coordinated approach jointly with lawyers, judges, medical officers and law  enforcement officers including the Attorney General."

Meanwhile, Kumara has been sacked from his job at the hospital due to the allegations against him. He has been unable to find work since.

His next hearing is scheduled for April 21.