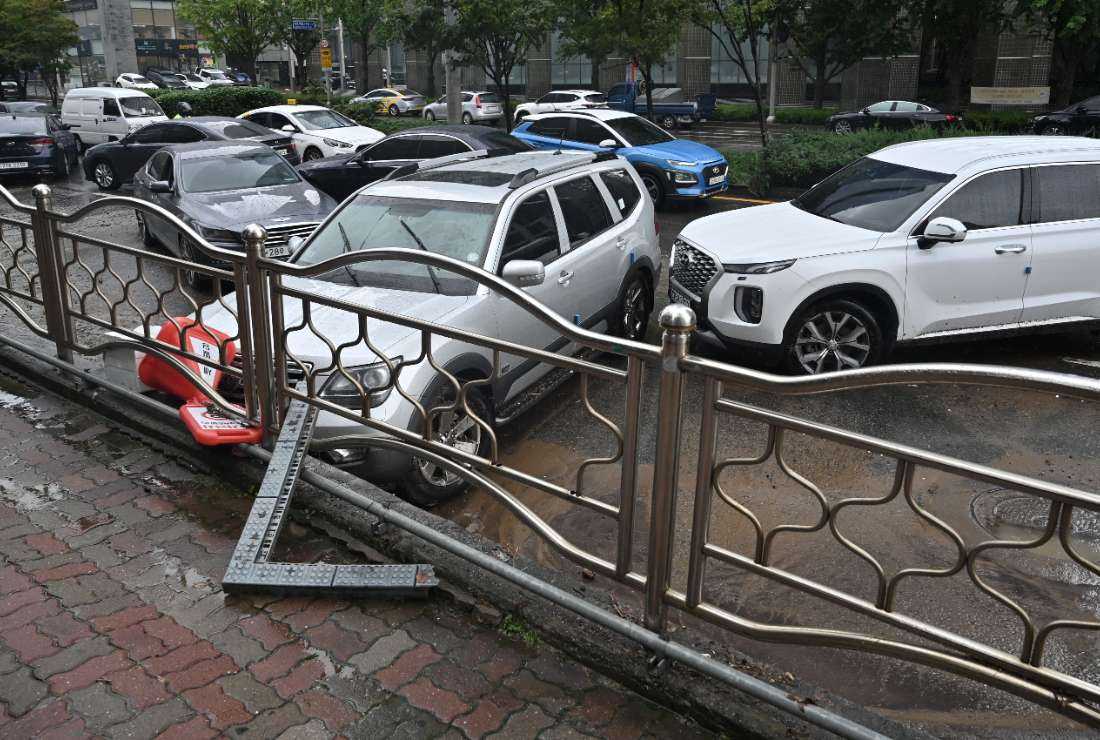 Cars damaged by flood water are seen on the street after heavy rainfall at Gangnam district in Seoul on Aug. 9. (Photo: AFP)

Authorities warned of more rain to come even as emergency workers tried to clear the hulks of flooded cars, which AFP reporters saw strewn across major intersections throughout the city.

The downpour that began Monday is the heaviest rainfall in South Korea in 80 years, according to Seoul's Yonhap News Agency.

"At least seven people died in the Seoul metropolitan area, while seven others are missing, due to heavy rain as of 7:30 this morning," an official at Seoul's Interior ministry told AFP.

Local reports said three people living in a banjiha -- cramped basement flats of the kind made famous in Bong Joon-ho's Oscar-winning "Parasite" -- including a teenager, died as their apartment was inundated by floodwaters.

Gangnam, a wealthy district in southern Seoul -- which was featured in Psy's 2012 K-pop hit "Gangnam Style" -- received 326.5 millimetres of rainfall on Monday, data from the Korea Meteorological Administration showed.

Yonhap said the downpours were the heaviest recorded since 1942.

"Record-breaking torrential downpours in the central region since yesterday have caused a lot of damage, including unfortunate casualties," Yoon said on Facebook Tuesday, adding the government would provide "prompt recovery and damage support".

Neighbourhoods close to the presidential residence in southern Seoul were affected, images of the flooding posted on social media showed.

The Korea Meteorological Administration warned South Koreans to "be careful of the heavy rain, gusts, as well as thunder and lightning in the central region" for the next few days.

The KMA also said that up to 300 more millimetres of rain was forecast for the central region including Seoul through Thursday.

Power outages were reported across the capital late Monday, while some operation of the Seoul metro and railway services was temporarily disrupted by the heavy rain.

The Seoul express bus terminal in Gangnam was submerged, and flood water also leaked into a cafe and library at the COEX Convention and Exhibition Center in the same area.

An image of a man in a suit sitting on the hood of a submerged vehicle in Gangnam district went viral, as did dramatic video showing a street of electrical lights shorting out, apparently due to flooding.

Hiking trails at many of the country's national parks were closed and passenger ferry routes, including from Incheon port, were suspended.