Torn between salary and safety: Indian nurses in Iraq 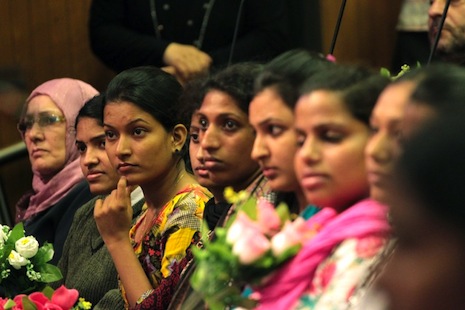 Indian nurses like these have been arriving in numbers to fill a skills gap in Iraq since 2012 (file picture: AFP Photo/Ali Al-Saadi)

In Kerala, a mixture of worry and uncertainty has fallen over the scenic Catholic village of Villoonni, in Kottayam district.

The catalyst for this mood is far away in war-torn Iraq, where several migrant nurses from this tiny village are caught in the conflict between government forces and Sunni insurgents, who have seized control of large chunks of territory including the country’s second largest city, Mosul.

At first glance, attempting to leave Iraq might seem like the obvious priority, but migrant nurses and their families in Kerela say it’s not that simple. In the end, the decision to stay or go comes down to a difficult choice between the relatively high salaries the nurses can earn in Iraq versus their own personal safety.

Fifty-two-year-old Parappurathu Jose, whose daughter Twinkle Anna Jose is working in the IBN Sina Hospital in Baghdad, says he has not slept for days.

“I'm always glued to the television [so I can] know what’s happening in Iraq. I pray for my daughter’s safety,” said Jose, a small time farmer.

“As of now, she is safe and attending to her duties. She is working in a heavily guarded hospital in the military area. But I’m scared. It’s a tough situation. Every day she is calling me at least four or five times.”

Jose says he is wracked with indecision over whether or not tell his daughter to come back from Iraq because she "the only earning member in my family”.

“We took a 300,000 rupees [about US$5,000] bank loan" to pay for her education and send her to Iraq last January, he said, explaining that if she returns to Kerala, they will have no way to repay the loan or pay for basic essentials.

According to Kerala’s Chief Minister Oommen Chandy, during the last three years about 2,000 Indian nurses have been recruited to work in Iraq, and the majority have come from Kerala.

“I’m worried about the developments in Iraq and have requested the federal government take a proactive role in bringing back them to Kerala. The state is ready to pay for their return ticket,” Chandy told ucanews.com.

But despite the danger, some nurses have already made up their mind to stay in Iraq.

Shalini, who is the wife of Jose’s cousin Luke, is working in the Al-Hilah Teaching Hospital in the ancient city of Babylon.

“I miss my kids, but I have loans to repay,” said Shalini. "I would prefer to die here than return empty handed.”

“I regret sending her to Iraq. But we had no choice as we have no home and were heavily in debt. She was offered a good salary of $750 per month and good working conditions,” Luke said.

“She wants to educate our kids in the best schools. We were dreaming of a good life after she worked two years there,” Luke said. “Now I don’t know what will happen to her.”

In nearby Eattumanoor, Chakiriyamthadathil Joseph and his wife Celin spend their days in prayer for their three daughters who are working in Iraq. The two youngest, Sona and Veena, are trapped in Tikrit where rebels have taken control.

“I spoke to my daughters on Saturday. They are safe. Their hospital has been closed and 47 nurses, the majority of them from Kerala, are staying inside the hospital. But they don’t know what’s happening outside," said Joseph.

Equally at risk are the Indian construction workers in Iraq. The government has no exact data on numbers but the total is estimated to be about 6,000-7,000. Chandy said that his office is receiving frantic calls from Iraq and Kerala seeking intervention. The kidnapping of 40 Indian contract workers has also sent shock waves across Kerala.

“We have our limitations and External Affairs Minister Sushama Swaraj assured me that she would do everything possible to ensure the safety of the Indian workers,” Chandy said.

Back in Parappurathu, in Jose’s small, asbestos roofed house, his mobile rings. Twinkle has called once again from Bahgdad. After speaking briefly with his daughter, Jose hands the phone over to his wife Ancy who is standing nearby.

Jose says that the phone calls are reassuring, but then pauses, and adds: “This war threatens to destroy my family.”