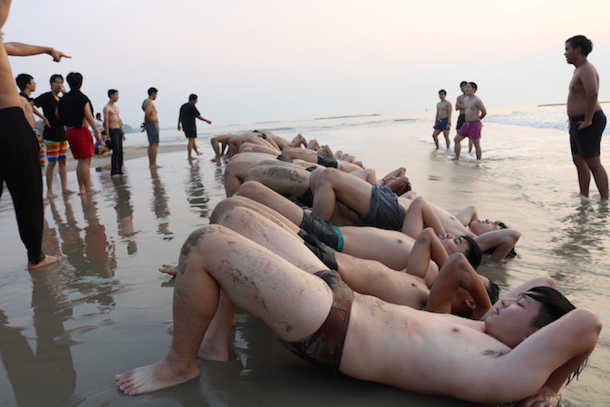 Freshmen from a university in Thailand are ordered by upperclassmen to do exercises during an outing to a beach this year. (Photo courtesy of Anti-SOTUS Facebook page)

Shortly after enrolling in a high school, Panuwat Songsawatchai was assigned a task by a group of upperclassmen. That task was to fill up a bucket with sweat.

“Older students ordered us freshmen into a room and then closed all the doors and windows so that no breeze could come in. It was hot and stuffy in there,” recalls Panuwat, who is now in his late 20s and is a liberal politician.

“They forced us to keep doing push-ups until our sweat began pooling on the floor. Our task was to fill up a bucket with our sweat by mopping it up with clothes and squeezing it out into the bucket.”

Later, as a senior student, he helped inflict the same kind of ordeal on freshmen. “I engaged in hazing myself,” Panuwat says. “I have to be honest about that.”

Soon, however, he came to regret having tormented freshmen the way he himself had been tormented. Today Panuwat, a member of Thailand’s progressive Future Forward Party, is a vocal critic of the country’s time-honored SOTUS (“Seniority, Order, Tradition, Unity and Spirit”) tradition, which is meant to inculcate new students with core values and routinely includes various forms of hazing.

“When I got into university, I was hazed again as a freshman there too. So I started speaking out against SOTUS. I realized this tradition wasn’t right,” he explains.

Yet speaking out did not earn him plaudits among his peers. “I began posting anti-SOTUS comments on Facebook, but a group of senior students didn’t like that, so they accosted me at my dorm and beat me up,” he adds. “They wanted to teach me a lesson.”

During what are supposed to be weeks-long fun-filled welcoming ceremonies, new students at high schools, vocational schools, colleges and universities are routinely subjected to a variety of demeaning and physically grueling activities, often in the style of military boot camps.

If they resist or fail to perform tasks in a manner deemed satisfactory by their seniors, they may be humiliated or outright abused.

Female students aren’t exempted from SOTUS activities. In their case, though, the tasks are usually less physically onerous. A common task involves singing a school’s anthem again and again. They may have to do this for hours on end after classes each day for weeks or even months.

“When I was a freshman, I refused to do these activities,” says Peerada Nuruk, a third-year student at a university in eastern Thailand where she majors in cultural studies and archaeology.

“If you don’t comply, they [seniors] punish you. They force you to wear shoes with extra-high heels in school every day, which makes it hard to walk. They do things like that.

“If you still complain, other students will cold-shoulder you. Some of my classmates still hate me for not joining in the activities in first year.”

Similar cases of ostracism are common among students. Those who refuse to partake in SOTUS activities could well wind up being shunned by those who see hazing as an important rite of passage.

“This tradition causes students to hate each other,” says Titiwat Swatdipanich, 22, who studies industrial engineering at a university in Bangkok. “You can submit to the system or you can fight it, but you can’t ignore it.” Students at a Bangkok university prostrate themselves at the feet of an elderly teacher in a show of deference. (Photo by Tibor Krausz/ucanews.com)

A system within a system

The idea behind SOTUS and its hazing rituals is to teach new students discipline, respect for their seniors and loyalty to their schools. Yet ordeals devised for freshmen are often nothing short of degrading or even sadistic. At times students may suffer debilitating injuries or even die.

In July, a 15-year-old boy who attended a high school near Bangkok succumbed to his injuries after a hazing performed by upperclassmen. The boy was supposed to demonstrate his manliness by enduring repeated kicks to his chest and abdomen. He went into a coma before suffering cardiac arrest.

The same month another student, who was 16, died of similar causes at another school.

Frequently teachers and school administrators remain unaware of the true nature and extent of hazing in their schools as more rigorous forms of hazing are conducted off campus by students, out of sight of teachers.

“They used to be able to do it openly, but [after increased publicity] they have moved it underground. Upperclassmen haze freshmen under the pretext of going camping and the like,” explains Rattapoom Kotchapong, a schoolteacher who works as a tutor in Bangkok.

“Faculty may disagree with this practice, but they turn a blind eye,” he says, stressing that it’s the students themselves who perpetuate SOTUS.

Ultimately, however, the problem isn’t with the students but with Thailand’s educational system, say critics of the SOTUS tradition. Thai education, they argue, continues to value conformity, obedience and deference over individualism, independence and critical thinking. This outdated value system is reflected in the way senior students see their relationship with junior students at many institutions.

“SOTUS is a system within a system,” Rattapoom says. “From an early age, Thai children are taught to be blindly obedient. Then as they get older they mimic the adult society around them. But this hurts my students and it hurts their ability to grow as persons.”

Panuwat concurs. “I think by and large the Thai educational system is designed to create zombies who can’t think for themselves,” he insists.

“In school, students are taught how to be part of a highly hierarchical society but they aren’t taught how to think freely and independently. SOTUS is an example of this sort of backward mindset.”