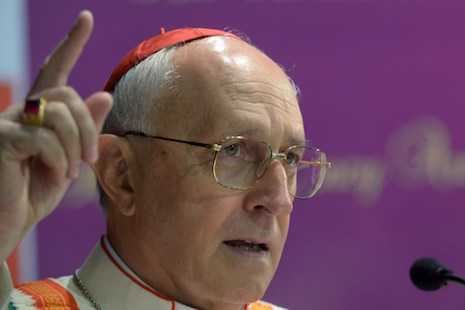 Cardinal ‎Fernando Filoni, the prefect of the Congregation for the Evangelization of Peoples, gestures during a function in Kolkata on Sept. 14. (Photo by Dibyangshu Sarkar/AFP)

Top Vatican official Cardinal Fernando Filoni has abandoned his plans to visit Nepal this week, Church officials in India said, amid a heated debate over secularism in the country’s constitution.

The Prefect of the Congregation for the Evangelization of Peoples was to visit Nepal Sept. 15-19 as part of a three-nation tour of South Asia. However, Nepal’s Ministry of Foreign Affairs said the time is not appropriate to visit the Himalayan country, according to local news reports.

Father Joseph Chinnayan, the deputy secretary general of the Catholic Bishops' Conference of India, confirmed that Cardinal Filoni would not be visiting Nepal, but added that he was unaware of the reason.

Officials with Caritas Nepal also confirmed that the cardinal’s visit had been canceled.

"We have no official information. But it is now known that the cardinal is not coming" to Nepal, said Jesuit Father Pius Perumana, who heads Caritas Nepal.

The cardinal was scheduled to meet local Church leaders and to visit areas where Caritas Nepal is helping people affected by the massive April earthquake that killed some 9,000 people and injured nearly 25,000.

According to local media, the tense political situation in Nepal may be to blame. The nation this week enters the final phase of voting to promulgate a long-awaited new constitution, after struggling for more than a decade to finalize wording on which all three major political parties can agree.

One major issue has been whether or not to drop a provision stipulating that Nepal is a secular state — a key concern for religious minorities, including Christians.

Many Hindus, who comprise more than 80 percent of Nepal's population, are demanding that Nepal be restored as a Hindu state. Hindu hard-liners believe secularization would leave Nepal vulnerable to religious conversions and other outside influences. In mid-August, pro-Hindu groups clashed with police, leaving dozens injured.

The cardinal's visit, then, could have been controversial for Hindu hard-liners. Cardinal Filoni heads the Church's evangelization efforts across the world.

The cardinal was cautious in public statements during a stop in Kolkata, where he told a gathering that the Church does not support proselytization.

"The Church grows not by proselytization, but by witness and attraction," the cardinal told a meeting of bishops from West Bengal at St. Xavier's College on Sept. 14.

As part of his planned tour, the cardinal visited Bangladesh and India before he was scheduled to go to Nepal. On Sept. 15, the cardinal will visit the tomb of Blessed Teresa of Calcutta and celebrate the Eucharist at the mother house of the Missionaries of Charity, the headquarters of the congregation that Mother Teresa founded.