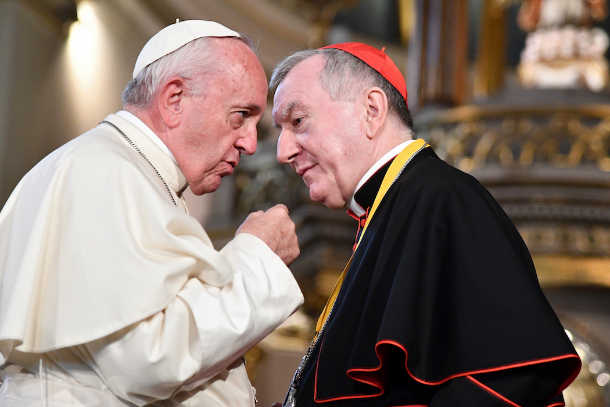 A file image of Pope Francis speaking with Vatican Secretary of State, Cardinal Pietro Parolin during his visit to Lima's Cathedral, in Peru on Jan. 21, 2018. (Photo by Vincenzo Pinto/AFP)

The Vatican’s top diplomat has told Chinese state-run media that Vatican-Beijing talks are focused on achieving concrete results for China’s Catholics while avoiding differences between the two ‘systems.’

Cardinal Pietro Parolin, the Secretary of State of the Vatican, conducted an exclusive interview with Global Times, an international tabloid run by the ruling Chinese Communist Party (CCP).

The first questions asked by the Global Times' special correspondent Francesco Sisci and staff reporter Zhang Yu centered on the provisional agreement between the Vatican and Beijing regarding bishop appointments signed on Sept. 22, 2018.

In the interview, Cardinal Parolin said the agreement is a starting point between both parties.

“There is confidence that a new phase of greater cooperation can now be opened for the good of the Chinese Catholic community and the harmony of the whole society,” Cardinal Parolin said.

“The channels of communication are working well. There are elements which demonstrate an increased trust between the two sides. We are inaugurating a method which appears positive and which will still have to be developed over time, but which, for now, gives us hope that we can gradually arrive at concrete results.”

The cardinal pointed out what was not being discussed with Chinese officials.

“China and the Holy See are not discussing theories about their respective systems nor do they want to reopen questions which by now belong to history,” he said. “Instead we are looking for practical solutions which concern the lives of real people who desire to practice their faith peacefully and offer a positive contribution to their own country.”

One of the Global Times questions was aimed at critics of the agreement.

“There is some opposition to the Vatican's dialogue with the Chinese government. What is your take on the opposition and what would you say to the opponents within the Church?” the Global Times asked the cardinal whose 400-plus word response was diplomatic.

“Many questions still need to be addressed and we are facing them with willingness and determination. I am well aware that no one has it completely worked out [or, indeed, can provide a magic formula!], but I can also say that we are committed to finding enduring solutions, which are acceptable to, and respectful of all concerned,” was part of his answer.

But the cardinal appeared to rule out considering certain criticisms.

“Obviously, criticisms which come from prejudiced positions and which seem to seek to preserve old geopolitical balances are another matter,” he said.

During the interview the cardinal said that the Vatican can cooperate with the Chinese government on issues of global importance such as peace initiatives and environmental emergencies.

Pope Francis, he added, sees “China not only as a great country but also as a great culture, rich in history and wisdom.”

Professor Wang Meixiu, a retired researcher on Catholic studies at the Chinese Academy of Social Sciences in Beijing, told ucanews.com that Cardinal Parolin’s interview with state-run media is another interaction that allows both parties to better understand the other.

“It can heal the wounds and reduce the conflict by bishops’ appointments in the past,” Wang said.

If the Vatican bases representative in Beijing this would improve communication between the two sides and boost the international image of the Chinese government, she said.

However, the interview disappointed some Catholics in mainland China who said that Cardinal Parolin was praising the CCP via one of the regime’s own propaganda outlets.

A Chinese Catholic commentator who identified himself as Paul told ucanews.com that he did not agree with the cardinal’s comments about criticisms based on ‘prejudiced positions’ that aim to ‘preserve old geopolitical balances.’

“That’s a wrong way to look at it. Any such criticism is more about opposing a dictatorship. Once the Vatican cooperates with a brutal dictatorship like what we have in China, then the consequences could be unimaginable,” Paul said.

“[The Vatican-Beijing talks] are only about an exchange of human interests,” he said. “God has been forgotten in it.”

Italian media reported that Cardinal Parolin was due to meet two Chinese bishops at the Catholic University of Milan during a conference on May 14.

Bishop Huang was an illicit bishop until he was pardoned by the pope after the China-Vatican provisional agreement.

The two bishops were invited to Milan by the controversial state-aligned Confucius Institute which is a part of the CCP’s soft propaganda efforts. They will also visit the Italian cities of Rome and Bologna.