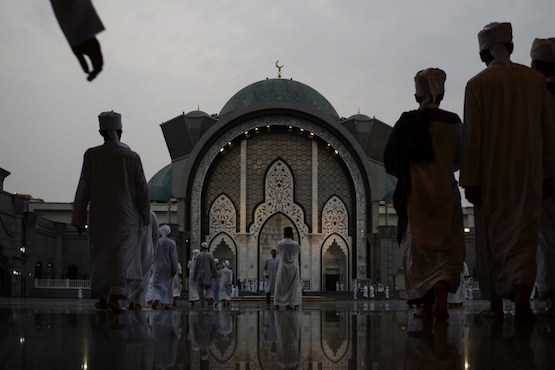 Malaysian religious students walking at a corridor of the Federal Territory Mosque before offering prayers during a gathering for students who had successfully memorized the Muslim holy book the Quran in its entirety, in Kuala Lumpur. (Photo by Mohd Rasfan/AFP)

Muslim citizens cannot convert to other faiths without consent of a Shariah court, Malaysia’s top court ruled on Feb. 27.

The ruling, read out amid a heavy police presence outside the courthouse in Kuching, Sarawak state, was made after four Muslims in that state appealed to the civil court to nullify their status as Muslims as they had embraced Christianity.

The four — one born a Muslim and three earlier converts to Islam — wanted the court to order the government to release them from Islam and change their status to Christian on their identity cards.

Under Malaysian law, "Islam" is printed below the picture of the holder on the identity card, also known as a MyKad. This is to aid the enforcement of Shariah, which is only applicable to Muslims.

After the verdict, Joshua Baru, son of Baru Bian, the lead advocate for the four, said that while it was "not the decision we hoped for however now the deadlock or limbo is broken" on the issue of apostasy.

"The decision seems to suggest a double standard of the jurisdiction of the civil courts and the interpretation of [the federal constitution]."

He was referring to a decision by the same court in January this year that declared that Shariah court powers are limited and the civil court is the final arbitrator in matters even if they concern Muslims.

In this instance, the five-member panel of the federal court, sitting in Kuching, unanimously ruled that civil courts could not provide the four with relief as it had no jurisdiction to decide on apostasy cases.

The four in their appeal to the top court had said the Shariah court had no power to decide apostasy cases under state laws.

Court of Appeal president Zulkefli Ahmad Makinudin said that although no such provision existed in the law, there were clauses in it which could be used by Shariah courts.

The panel was led by Justice Zulkefli, while the other members were Chief Judge of Malaya Justice Ahmad Maarop and Justices Hasan Lah, Jeffrey Tan and Ramly Ali.

The four applicants had posed the question to the Federal Court after their cases to nullify their status as Muslims were dismissed by the High Court in 2015 and later by the Court of Appeal in 2016.

Syarifah Nooraffyzza Wan Hosen, who was born a Muslim but embraced Christianity in 2009, had asked the court at the time for leave to initiate a case to force the National Registration Department to nullify the status of her religion on her identity card. The High Court declined her appeal based on previous rulings.

The case went up to the Court of Appeal, which reaffirmed the High Court's decision in 2017.

Baru Bian, counsel for the four, had submitted that Sarawak Shariah Court lacked the power to decide on apostasy cases while the Sarawak State Islamic Department and the National Registration Department submitted that provisions in the state laws regarding Islam were enough to deny their request.

If they wish to pursue the matter, Joshua said the only recourse now for the appellants is to approach the Shariah court to determine their status.

As things stand under Malaysian law, the four can be prosecuted by Islamic authorities for any breaches of Islamic codes of conduct.

Each state has its own Shariah laws. In the peninsula, the sultans are the heads of Islam. For Sarawak and Sabah, which have no royalty, the country’s king plays that role.

Adding bewilderment surrounding religious rights in Malaysia, the appeals remain opaque as the highest courts in the land, the civil courts, are under federal jurisdiction while Shariah courts are empowered by individual state laws.

Apostasy cases in Malaysia had always remained in a gray area until the current decision.