Intercourse on broken promise of marriage is not a sex attack, it rules 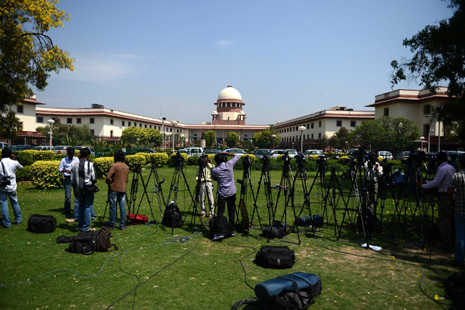 A view of India's Supreme Court, which has passed a new judgment on rape (Sajjad Hussain / AFP)

India’s Supreme Court has ruled that sex on a promise of a marriage that then doesn’t take place cannot be termed rape, in what observers are saying is a step forward towards recognizing free choice with regards to sexual relations in India.

The judgment came in the case of a woman who had accused a man of raping her after he declined to marry her, despite her consenting to sex on the promise of a subsequent marriage.

“Consent may be express or implied, coerced or misguided, obtained willingly or through deceit," top court Justices B.S. Chauhan and Dipak Misra said.

The court said a "clear distinction" exists between rape and consensual sex and the legal system must examine whether the accused had actually wanted to marry the victim, or had ulterior motives and had made a false promise only to satisfy his lust.

The court noted that rape reduces women to animals, but that sex on consent cannot be equated with rape.

A lower court in Haryana had handed a seven year sentence to the accused, a judgment upheld by the Punjab and Haryana High Court. However, the accused was acquitted by the Supreme Court after having served three years in jail.

Observers have responded positively to the verdict. An editorial in the Times of India yesterday welcomed the judgment as a "big step forward."

“Cohabitation between men and women, hitherto considered immoral and forbidden, appears to be gradually finding judicial acceptance," it said. The court ruling can "go some way towards reshaping social mores related to sex between adults" and shifts definitions of rape to one that "violates a woman's consent and choice, rather than that which offends conservative norms."

Social worker Jiten Singh, of the Lok Andolan (People's Movement), echoed the sentiment. “The ruling will go a long way in pushing the case of individual rights of grown up adults about sex and perhaps redefine rape in the context of modern life," he said.