Some 920,000 spectators are due to visit Tokyo each day for the mega sporting event involving 11,000 athletes 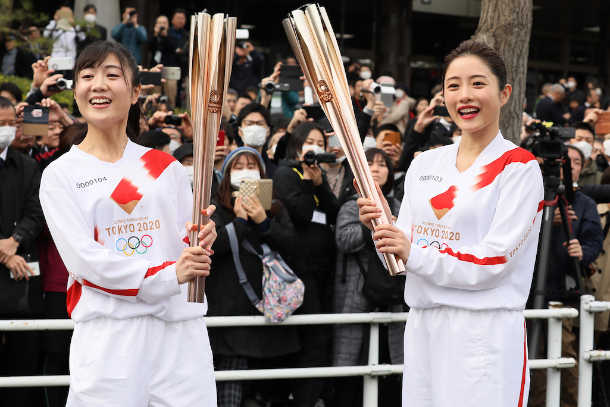 Actress Satomi Ishihara (right), one of the official ambassadors of the Tokyo 2020 Olympics torch relay, poses with the Olympic torch during a rehearsal for the relay in Tokyo on Feb. 15. (Photo: STR/Jiji Press/AFP)

With the International Olympic Committee confident that the 2020 Olympic Games will take place as scheduled in Japan in July, some Christian groups have seen an opportunity to widen their reach.

The Olympic schedule was threatened after Japan became the second-worst victim of the Covid-19 epidemic after China, with one death and 613 positive cases including 88 people on board the Diamond Princess cruise ship quarantined in Yokohama Bay.

Prime Minister Shinzo Abe told the Diet, the national parliament, that the Olympics will not be canceled or postponed despite fears about coronavirus infections.

Christian groups are trying to ride high on the Olympic spirit after a spokesperson last week confirmed that preparations for Tokyo 2020 were going ahead as planned.  The International Sports Coalition (ISC), which uses sports to address social issues around the globe, has invited Japan to collaborate with church leaders and their congregations. They are to cooperate in running local community festivals, according to Marty Woods, who heads the ISC's festival section. The Japanese have set up a mission team with a goal of 400 initiatives during the Olympics, the ISC said. The ISC said churches in Japan face two challenges: the lack of men in churches, where women outnumber men 7-1, and the second-highest suicide rate in the world due to its pressure-driven society. The International Sports Federation (ISF), a faith-based non-profit organization, is planning to make inroads into the Japanese community during the Olympics. “There will be something for everyone during the days of the Olympic ministry in Tokyo. The ISF will be organizing sports clinics for kids, a coffee shop ministry opportunities, community festivals that will involve kids' games, face painting, singing and all sorts of fun and engaging activities,” the ISF said in a statement. The Methodist International Mission Board (IMB) is planning an Olympics ministry that will help volunteer team leaders prepare for Connect2020, an evangelistic initiative. “Japan is less than 0.5 percent evangelical Christian, making the Japanese the second-largest unreached people group in the world,” IMB missionary member Daniel Rice said. The IMB’s community festivals will feature family-friendly games, activities, food and Gospel presentations.  Officially, Japan has 441,000 Catholics, making up just 0.3 percent of the country’s 127 million people. However, considering the floating population of Catholics in Japan, the number of Catholics should be at least double the official figure, church experts say.

The fanfare around the Tokyo Games, which will begin on July 24, is well underway and the Olympic torch relay is slated for March 26.

Hit by three recessions, the Japanese government is planning to bolster the economy by attracting 40 million foreign visitors to the country.  According to a Bank of Japan report, 920,000 spectators are expected to visit Tokyo each day for the mega sporting event involving 11,000 athletes from 200 countries. After millions of tickets were sold, flights and hotels booked and a US$3 billion local sponsorship, Japan had expressed apprehension about holding the Games as planned because of the coronavirus epidemic. The virus has already led to the cancellation of many international sports, including the Formula One Grand Prix in Shanghai and the indoor world track and field championships in Nanjing, and the rescheduling of women’s Olympic football qualifiers. Since winning the bid to host the Games seven years ago, Japan has tapped into the popular consciousness by promoting the event as a symbol of pride. Observers say that if the 1964 Tokyo Games stood for Japan’s rapid modernization, the upcoming Games will allow the government to position Japan as a cultural, if not economic, superpower.