Tokyo Archbishop Tarcisius Isao Kikuchi admitted to some confusion after being informed that a new Catholic seminary for Asia will be established in the Japanese capital.

He issued a statement on Aug. 15 saying he was not aware exactly where the seminary would be located or when it will become operational. "I am very confused by the decision of the congregation," the statement read.

Archbishop Kikuchi said he received a letter from Cardinal Fernando Filoni, prefect of the Congregation for the Evangelization of Peoples, unilaterally announcing that the seminary would be established somewhere in Tokyo Archdiocese.

The seminary's constitution, attached to the cardinal's letter, states that the purpose of the college is "to prepare lay faithful of the Neocatechumenal Way for the priesthood for the evangelization of Asia."

"Therefore, making its own the solicitation expressed by the pope for the evangelization in Asia, after having consulted bishops, priests, religious brothers and sisters, and laity, who are deeply concerned for evangelization of the continent of Asia, with the high assent of Pope Francis, I established the Seminary Redemptoris Mater for Asia, with its principal Seat in Tokyo, and directly dependent on this congregation," Cardinal Filoni's letter continued.

Archbishop Kikuchi expressed surprise that senior clergy in Japan including himself had not been brought in for discussions on the matter.

"To say the least, neither I, the local archbishop, nor Archbishop Okada, my predecessor, have been consulted," he said.

A seminary with the same Redemptoris Mater name was established in 1990 in Takamatsu Diocese as a diocesan institute but it closed in 2009 after conflict with local lay people about the financial burden it represented.

This bubbled up into a dispute between certain groups and Bishop Satoshi Fukahori, resulting in a defamation suit against the bishop that he lost.

In his statement, Archbishop Kikuchi recalled those "tragic days." 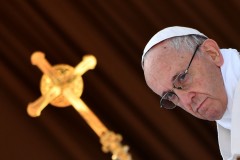 "I do not want to deny or ban a movement the Holy See has approved. Moreover, I [would] never limit or exclude these Vatican-approved movements," he said.

However, "it is difficult for me to understand the re-establishment of a seminary solely for the Neocatechumenal Way in Japan without any reflection and study on this history," he added.

In March, Japan announced it would be reversing a merger of the national seminary system, with the Japan Catholic Seminary's two campuses in Tokyo and Fukuoka to now cover separate regions.

Archbishop Kikuchi was nominated by Pope Francis in Oct. 25, 2017. A former missionary to Africa, he has also served as the president of Caritas Japan and Caritas Asia.

The Divine Word prelate is now responsible for 90,000 faithful in a city with over nine million inhabitants. There are an estimated 500,000 Catholics among Japan's 127 million people.