Opening a prayer service held in penance for the sin of racism and to promote racial justice, Archbishop Bernard A. Hebda of St. Paul and Minneapolis said the faithful lament together the stark reality of racism in the world.

"We hope to recognize in our prayer tonight at least some of the many ways, intentionally and unintentionally, that our words and our silence, our actions and our inaction, contribute to racial division," the archbishop said Dec. 2 at the Cathedral of St. Paul in St. Paul.

"We also hope to recognize what is needed to heal what divides us," said the archbishop, who was joined at the prayer service by Auxiliary Bishop Andrew H. Cozzens. "Through our prayer of confession and for transformation, may the Holy Spirit inspire us."

The evening prayer service was part of a day of prayer and fasting in the archdiocese against the sin of racism, which began with a 7:30 a.m. Mass at the cathedral.

Father Michael Joncas, a priest of the archdiocese and artist-in-residence and research fellow in Catholic Studies at the University of St. Thomas in St. Paul, proposed the idea after the May 25 police-involved death of George Floyd, an African American in Minneapolis, led to protests, rioting and soul-searching locally and across the country.

Catholic schools and ministries were invited to participate in the day in ways they best saw fit.

DeLaSalle High School in Minneapolis, for example, shared a post on its Facebook and Twitter accounts. The school did not have classes, but staff held a professional development day and began it with a prayer from the U.S. Conference of Catholic Bishops for racial healing, said Matt Lehman, a spokesman for the school.

Registration for the prayer service, social distancing and facial coverings were encouraged to help prevent spread of the novel coronavirus, and the gathering was livestreamed from the cathedral's Facebook page.

Father Prentice Tipton Jr., an African American, delivered the homily. He is rector at the Cathedral of Mary of the Assumption, and pastor of Holy Family Parish, both in Saginaw, Michigan. An alumnus of the St. Paul Seminary School of Divinity in St. Paul, he was ordained a priest for the Diocese of Saginaw.

Father Tipton described what he calls "penitential moments," with one recounted in the evening's Gospel reading, about the crowd that had assembled for "the spectacle of the crucifixion," seeing Jesus die, then walking home beating their breasts, a gesture of grief, the mourning of disappointment. 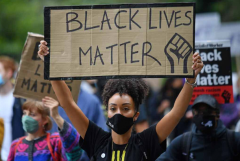 "A penitential moment is what is recounted in tonight's Gospel, in the face of how the world can trample upon the humanity of the only truly innocent one to ever walk the face of the earth," Father Tipton said.

Father Tipton quoted from a USCCB pastoral letter, saying that the evil of racism festers, in part, because as a nation, there's been very little formal acknowledgment of the harm done to so many. To confront the persistence of racism, he said, "we have to recognize we're dealing with a spiritual problem, not simply a political or economic or social problem."

Christians' goal is not tolerance, Father Tipton said, but reconciliation: "reconciliation with God first," he said, "because the race problem is a sin problem and it is the cross of Jesus Christ that breaks the dominion of sin over our lives and over our community."

This is part of what it means for the church to be a "new creation," he said, a venue where "that adversarial dynamic between black and white in the world comes to an end, along with all the mistrust and the baggage that that implies."

Father Tipton said he believes God wants "to do a new thing" between the races in America. "And I believe the church is the venue where the new thing is meant to begin," he said. "And I say to you that if the church were to get this right, all of America, and I believe the whole world, will come to her knees because the church has found an answer, a remedy to the sin that has grieved a great nation for many, many centuries."

Deacon Ramon Garcia Degollado, who serves Holy Rosary in Minneapolis, proclaimed the Gospel in Spanish. Deacon Zephirino Tumwejunise, who is in priestly formation for the Diocese of Kabale, Uganda, at St. Paul Seminary, read seven petitions related to confessing sins, many related to racism.

Denise Holland said she went to the cathedral with her husband, Lance, and their three children, who are of college, high school and middle school age, to discuss the issues and place them in the context of Catholic faith and spirituality.

Members of Nativity of Mary Parish in Bloomington, Minnesota, the family visited the George Floyd memorial at the site of his death on a south Minneapolis street this past summer and heard a "powerful sermon" given in a nearby parking lot by a pastor at a local church.

"He shared his personal story of injustice," Denise said, and how he moved through his anger and hatred by turning to God. "The only way forward in seeking racial justice as a community is through God," she told The Catholic Spirit, the archdiocesan newspaper.

"What I appreciate about the Catholic faith is ... the richness and tradition, and strong Catholic teachings that sometimes we don't know as well as we should," she said. "I thought this was an important opportunity to come together as a community, as an extended family, almost to do a collective examination of conscience."