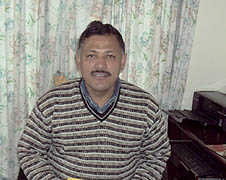 A leading Nepalese social activist and development expert recently awarded the “14th Justice and Peace Award 2011” in South Korea says he would not be where he is today if it hadn’t been for Caritas Nepal. Arjun Karki, the 47 year old president of Rural Reconstruction Nepal (RRN), was awarded the prize on Dec. 10 for his exceptional contribution to protecting human rights and the development of impoverished and marginalized communities in Nepal and other under developed countries. The award commemorates late Catholic Bishop Daniel Tji Hak-soon and acknowledges individuals or organizations in Asia working courageously for democracy, human rights, justice and peace, and showing deep commitment towards the poor and oppressed. "I can say that Caritas Nepal was my foundation stone. If it had not been for Caritas Nepal I probably would not have taken up social development work so seriously," Karki said. He said he worked closely with Caritas Nepal which funded several RRN projects during the 1990s, especially with the late Ashish Gurung, the organization’s principle founder and director. "I found Gurung an exceptionally selfless man while we provided relief to disaster victims, refugees or worked in villages. Maybe it was because he was a former Catholic priest," Karki said. “Even today I continue to find Catholic priests or bishops working in various countries or for UN agencies very inspiring and I continue to learn a lot from them,” he added. Rupa Rai, Caritas Nepal’s Women Desk chief said Karki fully deserved his award. “I remember he started the development work for women in Bardiya district [west Nepal] with Caritas Nepal’s support and since then he has made exemplary expansions of this and other projects,” she said. Apart from heading RRN Karki is also chairman who coordinates LDC Watch, a global alliance of national, regional and international civil society organizations working in 48 UN-defined “Least Developed Countries” in Africa, the Caribbean and Asia. He is now a lobbyist and campaigner on many issues related to internationally agreed development goals, including the Millennium Development Goals and the Brussels Program of Action for least developed countries. Karki, is due to collect his award in South Korea on March 10.   Related report Dalit group Janodayam wins Tji Hak-soon award NP13027.1638