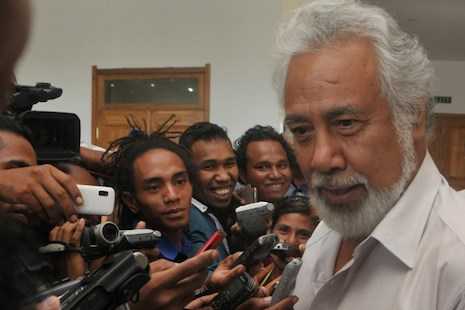 By Aquino Campos for AFP, Dili

Timor-Leste resistance hero Xanana Gusmao has submitted his resignation as prime minister, the government said Friday, after more than a decade leading the half-island nation during the fraught early years of its independence.

The president must now decide whether to accept the resignation of the 68-year-old, who has served as either president or prime minister since Timor-Leste became independent in 2002 following a long struggle against Indonesian occupation.

The departure of the former guerrilla fighter would deprive the predominantly Catholic Timor-Leste of a unifying figure who has helped resolve numerous crises, but analysts say it is time for Gusmao to step aside to enable a transition to a new generation of leaders.

Speculation had been mounting that Gusmao would step aside soon after he began talks with the president earlier this week about a major government overhaul, which is expected to be announced in the coming days.

In a statement Friday, the government said that Gusmao "has sent his letter of resignation from the post of prime minister to the president", Taur Matan Ruak.

"It is now for the president of the republic to consider and respond to the letter of resignation."

If it is accepted, then Gusmao will remain premier until a replacement is sworn in. Gusmao has "encouraged all members of government to work calmly in this time of transition until the new government is sworn in," the statement added.

It is not clear what role, if any, Gusmao would play in a new government, or who would succeed him. Observers say he may keep some sort of role to ensure a smooth transition.

In an earlier statement, authorities said talks were under way on a "major restructure of the government".

Authorities want to "reduce the size of the executive to create a more efficient and functional body focused on results, and allow opportunities for a younger generation of leaders to make a contribution to the nation", said the government statement.

Analysts said that the reshuffle could be aimed at getting rid of ministers from Gusmao's coalition who had been accused of corruption, before he steps down.

Gusmao has repeatedly delayed his resignation, with observers saying he was likely trying to ensure the graft scandals were dealt with before he stepped aside.

He led the military wing of the Revolutionary Front for an Independent East Timor (FRETILIN), which fought against Indonesian occupation. Before Indonesia invaded in 1975, Portugal had ruled Timor-Leste for centuries.

He spent years hiding out in the jungle before being captured and imprisoned in Jakarta towards the end of Indonesian occupation. However, he continued to lead the struggle for independence from behind bars.

After the Timorese voted overwhelmingly for independence in a UN-backed referendum in 1999, he returned to his homeland a hero and was elected the country's first president in 2002. He has been prime minister since 2007.

He is credited with resolving numerous crises in the chaotic early years of the country's independence.

After returning to Timor-Leste following the referendum, Gusmao urged reconciliation, persuading pro-Indonesian militiamen who had gone on a murderous rampage following the vote to return home.

Gusmao also helped to keep a lid on communal tensions after a crisis in 2006, when soldiers sacked from the army launched a mutiny that sparked factional violence that left dozens dead and forced 150,000 into makeshift camps. AFP