With reserves dwindling and nothing to fall back on, political woes seem to be the least of the country's problems 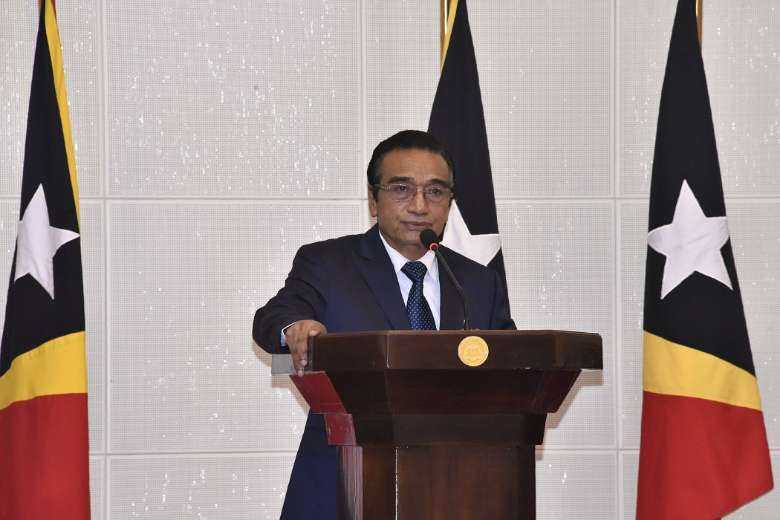 Timor-Leste President Francisco Guterres is seeking another term in office in a presidential election due on March 19. (Photo: AFP)

More than half the population of the Catholic-majority country are expected to vote in an election that will determine whether President Francisco "Lu-Olo" Guterres remains in power.

It’s a much-awaited election following years of political tension between Guterres and former president and prime minister Xanana Gusmao — both independence fighters — that have nearly crippled the government since Guterres was elected in 2017.

Several top politicians have declared their intent to run in the presidential election scheduled for March 19, including President Guterres, who officially declared his candidacy this week.

He is being backed by former prime minister Mari Alkatiri of the Revolutionary Front for Independent East Timor or Fretelin party.

Timor-Leste is among the world’s most oil-dependent nations, which throws up grave concerns for the future

He might get an endorsement from Xanana and his National Congress of Timorese Reconstruction (CNRT) party.

Two women could also be in the race: Milena Pires, a permanent representative to the UN, and Angela Freitas of the Timor-Leste Labor Party. A court has to rule on their candidacy in February.

However, it doesn’t really matter who wins the presidential race or who is appointed prime minister after next year’s legislative election as there is a more serious issue looming on the horizon.

A fundamental concern that overshadows the future of the tiny Catholic nation is that it is too dependent on a single resource-based economy. Little attention is being given to non-oil industries, such as agriculture or manufacturing, other than coffee.

Timor-Leste is among the world’s most oil-dependent nations, which throws up grave concerns for the future. The main problem is that the wells will run dry soon and it’s dangerous for the country not to start thinking about diversifying the economy.

Most Timor-Leste leaders think, or perhaps they are conditioned to believe, that living on oil revenues is enough for the country to survive for generations.

They must change that mindset and realize that the lucrative oil era is beginning to fade and is already starting to affect the country’s politics.

Some people say that political instability in recent years is not just a power-sharing dispute but has something to do with the mismanagement of oil funds.

The tension between Guterres and Xanana and his CNRT party that has resulted in a political crisis over the past five years was not merely due to constitutional matters. It was also the result of deep concern about the state budget, 90 percent of which is dependent on petroleum funds and is prone to corruption.

The conflict started when Guterres objected to and delayed for two years the appointment of several CNRT politicians to key cabinet posts.

His disapproval angered CNRT parliamentarians who demanded the Court of Appeal investigate the president for violating the constitution. The court dismissed the petition and no action was taken against the president.

His 2020 budget proposal was rejected by the CNRT coalition in parliament. It became a serious problem when Covid-19 started to affect the nation.

If the government fails to act now to develop other sectors of the economy, Timor-Leste will be engulfed by a huge problem once the country’s oil runs out

Failure to get approval for the proposed budget prompted the prime minister to offer his resignation, which was rejected by the president.

The tussle over the state budget is seen as an indicator of future disputes, which will likely center on oil revenue.

Charles Scheiner, a researcher at La'o Hamutuk, an independent Timor-Leste policy research and advocacy group, said petroleum revenue reserves have drastically declined. From the US$23 billion already received and $8 billion in interest, only around $18.4 billion remains. He said it won’t be long before this cash runs dry.

Production in the Bayu Undan oil field, the primary source of Timor-Leste’s income, continues to decline. The Greater Sunrise and Tasi Mane projects said to be worth billions have not shown much progress.

These two projects and another 18 onshore and offshore exploration blocks being offered to investors are feared to be going nowhere. With banks increasingly focusing on alternative energy to address climate change demands, they will likely move away from financing billion-dollar fossil fuel businesses.

Meanwhile, manufacturing and agriculture have been neglected despite 70 percent of Timor-Leste’s 1.3 million population living in rural areas.

The country's extraordinarily high population growth and high levels of poverty, malnutrition and unemployment, which have been exacerbated by the Covid-19 pandemic, pose a big challenge for the nation that will mark the 20th anniversary of its independence when the new president takes office in May.

Dependency on a depleting oil sector is a ticking time bomb. If the government fails to act now to develop other sectors of the economy, Timor-Leste will be engulfed by a huge problem once the country’s oil runs out, if not sooner.