Payout offer an attempt to lure vaccination doubters into getting jabbed 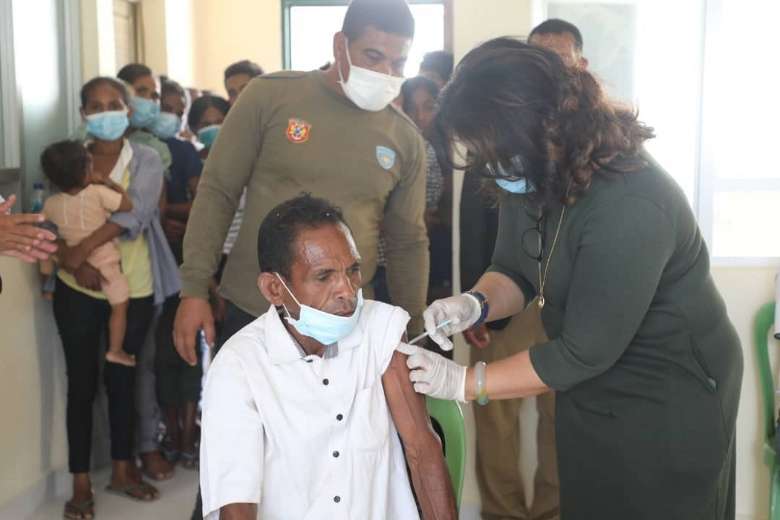 A resident from the city of Ermera is vaccinated on Aug. 19.  (Photo: Timor-Leste Ministry of Health)

Timor-Leste will compensate people in the rare event they may be badly affected by adverse reactions to Covid-19 vaccinations, the government says.

The move is aimed at encouraging more people to get inoculated as the number of new cases and deaths continues to rise.

State news agency Tatoli reported on Sept. 4 that President Francisco Guterres “has agreed to the law on financial compensation for individuals who are seriously affected or for families of those who die after receiving Covid-19 jabs.”

Guterres said: "Assistance is necessary if there is scientific evidence that the vaccine is harmful to an individual."

The move was approved by the Council of Ministers in July. However, the law requires final approval from the president before being implemented.

In an official statement, council chairman Fidelis Manuel Leite Magalhaes said that although there is currently no adverse effect from the vaccine, "the state will be responsible for any fatalities.”

He said the Health Ministry and health workers would conduct an investigation to decide whether compensation should be given.

A patient who experiences a rare case of disability will receive compensation ranging from US$1,000 to $7,000. If a patient dies, $10,000 will be given to the family as compensation, he said.

The move comes as the country looks to complete its vaccination program this year despite many having doubts over its effectiveness. Meanwhile, the World Health Organization and the government in a joint statement on Sept. 4 warned of a worsening countrywide pandemic situation caused by the Delta variant with a large increase in the number of people infected, hospitalizations, severe cases and deaths.

The statement asked residents in capital Dili, including those who have been fully vaccinated, to comply with home confinement rules.

“Although the government had previously said that anyone who had full vaccination would be exempt from this rule, the worsening situation has forced the government to quickly take this radical measure,” it said.