The number of patients has reached 647, of which 466 are in national capital Dili 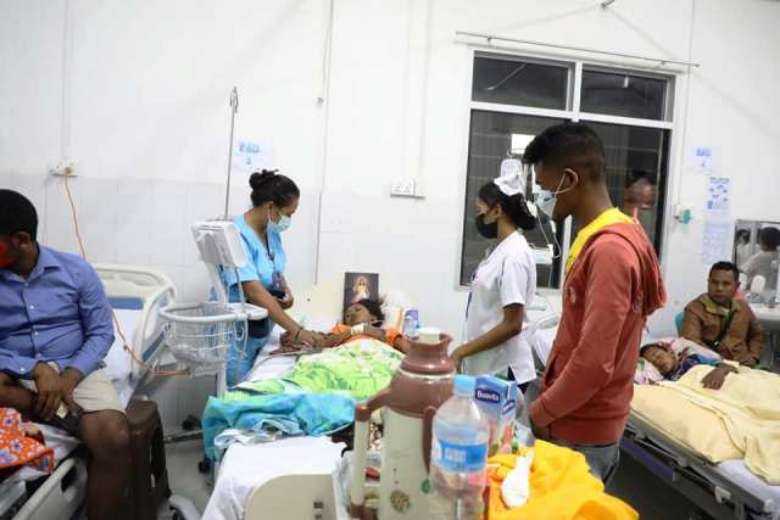 Dengue fever patients being treated at the Vera Cruz Health Care Center after a major outbreak in Timor-Leste. (Photo: Timor-Leste Ministry of Health)

Timor-Leste has recorded a significant increase in dengue fever cases with this year’s death toll already touching 14, making it the deadliest year in recent times.

A report by the Ministry of Health published on Jan. 20 confirmed that the 14 deaths recorded so far this year had surpassed the 11 and 10 deaths recorded in 2021 and 2020 respectively.

The total number of cases in the island nation in Southeast Asia has reached 647, of which 466 are in Dili.

The report further stated that a majority of the patients were children under 14 years. Some 45.7 percent of affected children were between 5-14 years, 34 percent between 1-4 years and 7.7 percent under a year old.

The report conceded that apart from infrastructure problems, the Catholic-majority country's health system is facing a shortage of doctors and other health professionals and that the situation could worsen in the coming months.

"We urge residents in Dili and other cities to immediately go to the nearest health facility when experiencing symptoms of dengue fever," the ministry said in the report.

The outbreak has forced authorities to use health facilities previously designated for isolation of Covid-19 patients, such as the Vera Cruz Health Care Center, as places to treat dengue fever patients after the state's main Guido Valadares National Hospital was overwhelmed. Since Jan. 5, the center has treated 200 dengue patients.

Meanwhile, the World Health Organization (WHO) in Timor-Leste has pledged its support by undertaking to help the government share comprehensive information with the public on dengue fever control and treatment.

“WHO is offering technical support for dengue prevention communications through its official website, Facebook, television, radio and online media,” said Arvind Mathur, WHO representative in Timor-Leste.

WHO has also provided financial assistance of US$200,000 along with 10,000 dengue fever detection kits and mosquito-repellent powder and liquid, reported state news agency Tatoli.