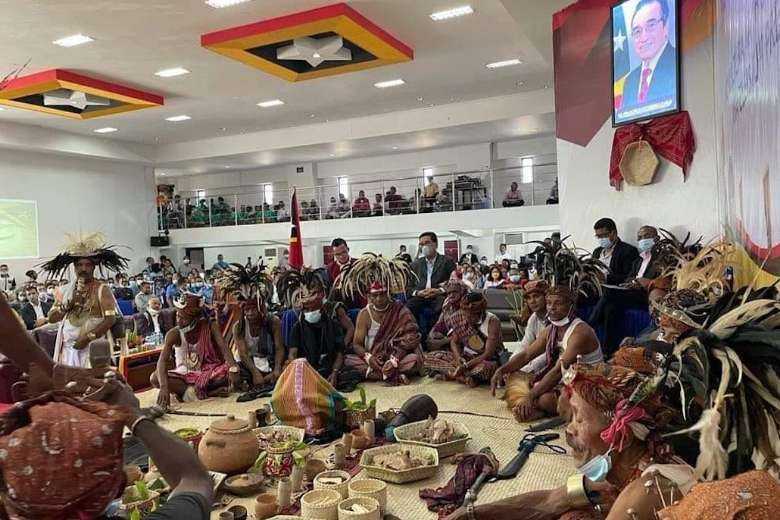 A traditional ceremony is performed during the signing of a national unity pact by Timor-Leste's presidential candidates on Feb. 28. (Photo supplied)

Candidates in Timor-Leste’s upcoming presidential election have signed a national unity pact, part of a commitment to ensuring a free, fair and peaceful electoral process and not one tarnished by mudslinging and violence.

In a Feb. 28 ceremony organized by the General Elections Commission (CNE) in Dili, 11 of the 16 candidates contesting the March 19 poll attended, while the other four were represented by close aides.

The signing of the pact was marked by traditional rituals in which local elders performed several rites asking for the blessing of ancestors to ensure a peaceful campaign and no confrontations between supporters.

CNE president José Belo said the rites not only took place in the nation's capital but in all municipalities across the country on a smaller scale.

“We performed rituals like this throughout the country to ensure free, fair and peaceful elections. Customs and culture are important to convey hope that this will be a peaceful election,” he said.

Campaigning for a general election in 2018 was marred by violence and political mudslinging.

Whatever the final outcome, it is clear that the winning candidate will play an important role in shaping the next phase of the country's development

The unity pact for this upcoming poll stipulates complying with the constitution, promoting human rights and gender equality as pillars to strengthen democracy; promoting dialogue as a means to establish peace and national stability and unity and accepting the election results.

With 16 candidates running, surpassing the 12 candidates in the 2012 election, this year's election promises to be the most competitive in the Catholic-majority nation's history.

The first round takes place on March 19 and the second round on April 19 if no candidate wins more than 50 percent of the vote in the first round.

In a statement on March 2, Roy Trivedy, the United Nations resident coordinator for Timor-Leste said he hoped the electoral process would be smooth.

"Whatever the final outcome, it is clear that the winning candidate will play an important role in shaping the next phase of the country's development," he said.