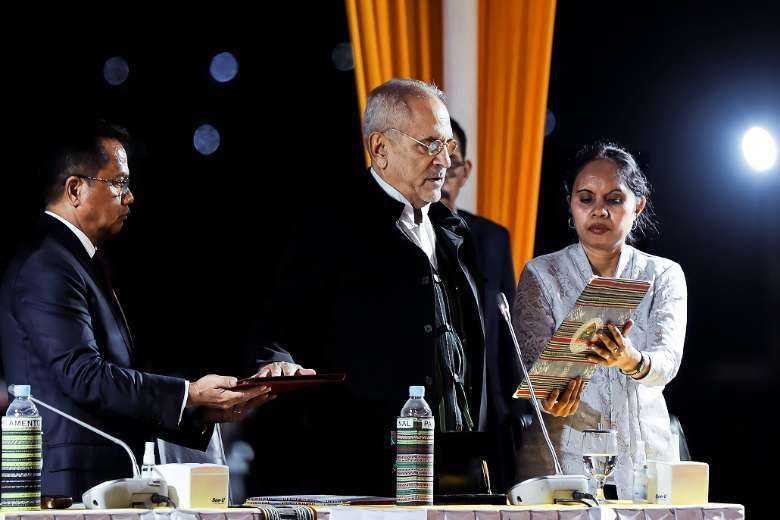 Newly elected President Jose Ramos-Horta reads his oath during his inauguration ceremony in Dili on May 20. (Photo: AFP)

Timor-Leste President Jose Ramos-Horta has described a new law on the president's responsibilities, which was passed swiftly before his inauguration, as unconstitutional.

In a 26-page petition filed with the Court of Appeal on June 6 seeking a preliminary review, he called the law "formally unconstitutional," detailing violations of the constitution that involved a number of arguments, including the lack of competence of parliament to enact the law.

Ramos-Horta also observed that the crimes defined in the law are “so vague and ambiguous” that it can interfere with his duties.

“Many of the acts that are said to constitute ‘crimes’ contained in the proposed law are already covered in the Penal Code,” he said.

The president said the law has the potential to limit and affect the exercise of his discretionary powers.

"In this was they fundamentally subvert the constitutional system and have the potential to constrain the president's action and leave him at the mercy of party-political wrangling in government and parliament,” he said.

His petition also said the law “constitutes a serious violation of the rule of law in the manner that it seeks to criminalize the actions of a specific individual rather than the behaviour of a group of people, i.e. office holders of state organs.”

Professor Camilo Ximenes Almeida, a political analyst at the National University of Timor-Leste, backed the president's move, saying that "what should be able to limit the president's powers is the constitution" without the need for a special law.

"The constitution alone is enough. What parliament has made does not have a solid legal basis," he told UCA News.

"The parliamentary move is only a political interest between government parties to maintain their position or power in order to weaken the new president."

The law, which was passed on May 16 before Ramos-Horta took office on May 20, was proposed by three parties, including the Revolutionary Front for the East Timor Independent Party (Fretilin), which backed incumbent Francisco "Lu-Olo" Guterres, who was defeated by Ramos-Horta in the presidential election on April 19.

It consists of 30 articles stipulating the president's "constitutional obligations" and a prison sentence of between two and eight years in cases of "coercion against a constitutional body."

It also covers crimes such as an “attack against the constitution,” which carries a sentence of 5-15 years, “attempts to challenge the constitution ... with the aim of changing or suspending it by force or by means other than democratically provided.”

The same penalty applies if the president "by gross deviation or abuse of his functions or by serious violation of the duties attached to him, even through non-violent means or threats of violence, attempts to destroy, change or overturn the rule of law."

Deviance, denial of justice, humiliation or refusal to carry out court decisions are also crimes.

The law comes amid fears that Ramos-Horta could dissolve parliament after his inauguration, something the main supporter of his candidacy, Xanana Gusmao, chairman of the Timor Reconstruction National Congress party, wants after saying so publicly several times during the campaign.

Archbishop Dom Virgilio do Carmo da Silva of Dili asked the president in a post-election statement to uphold the constitution and become the leader of all Timorese people.