Salesian Archbishop Virgilio Do Carmo da Silva of Dili has called on the people of Timor-Leste to participate in the government's vaccine program and adhere to health protocols as the number of cases in the Catholic-majority country continues to rise.

He issued the call amid concern people are failing to realize how serious the pandemic is and are not enthusiastic about being vaccinated.

In a video message, the archbishop said that "all religions teach us to take precautions to prevent disease, save lives and protect others."

"Everyone has a role to play, encouraging us to get a vaccine when the time is right," he said in the video produced jointly by the Ministry of Health, the Timor-Leste office of the United Nations Children’s Fund and the World Health Organization.

"We will be protected if we comply with prevention measures and receive a Covid-19 vaccine to protect ourselves, our families, and our society," he added in the video released on April 15.

Archbishop Da Silva was one of the first public figures to receive the AstraZeneca vaccine along with Prime Minister Taun Matan Ruak and other government officials when the rollout began on April 7.

Together we can protect ourselves, our families, our communities and our nation

The archbishop said he was committed to receiving the vaccine when it became available. "Together we can protect ourselves, our families, our communities and our nation."

He said he believed Timor-Leste was still suffering from ignorance about the virus, which as of April 19 had infected 1,368 people in 12 municipalities, with 673 active cases and two deaths.

The highest daily increase was recorded on April 18 with 70 cases.

The tiny country of about 1.3 million has so far received 24,000 doses or 20 percent of the total that the country was allocated through the Covax scheme led by the World Health Organization that aims to ensure vaccines are shared fairly among all nations, rich and poor. 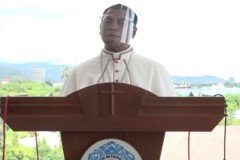 Odete Viegas, general director of the health provision service at the Ministry of Health, said on April 20 that 14,000 doses have been administered — mainly to frontline health and community workers — so far and the first batch is expected to run out by the end of the month. The second batch will arrive in May and those who have received the first dose will receive a second one.

As vaccination is not mandatory, Viegas said, only 5,000 out of 13,000 frontline workers in Dili have been vaccinated so far.

PM Taur Matan Ruak said the government wants all citizens vaccinated by the end of the year and asked for assistance from other countries to acquire more vaccines.

"The government has already set aside US$35 million for vaccines," he said in a recent statement.