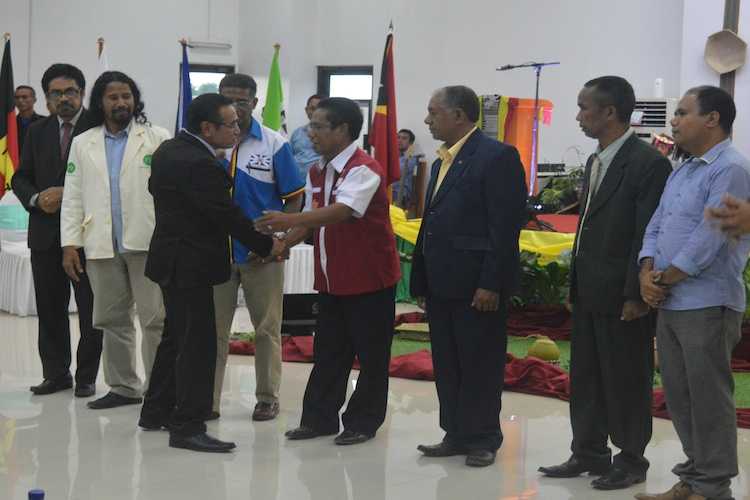 Timor-Leste president, Francisco Guterres Lu-Olo, greets party leaders at the signing of a declaration to conduct a peaceful campaign in Dili on April 7. (Photo by Thomas Ora)

Party leaders in Timor-Leste have agreed to maintain peace and national stability during an electoral campaign set to begin officially April 10 ahead of the election in May, which is already seeing signs of tension.

At the signing of a "pact of national unity" on April 7 at the Election Commission of Timor-Leste the eight parties and alliances competing in the poll also pledged "not to insult other parties during the campaign."

President Francisco Guterres 'Lu-Olo', in a speech, called on the country's elites to show maturity in politics and democracy and reminded them that leadership is not about power but serving the people.

He encouraged them to show the world that Timor-Leste, despite being a new democracy in Southeast Asia and the Asia Pacific, has something to offer the world through a fair election.

"The most important thing is to show people your programs, how to liberate people from poverty, not insult other parties," Lu-Olo said.

Timor-Leste's 1.2 million people are facing their second election in just 10 months after the minority government of Mari Alkatiri's Fretilin (Revolutionary Front for an Independent East Timor) Party, which narrowly scored the most votes, but not an outright majority on July 23, 2017, failed to secure enough support over eight months to pass any legislation including a budget.

But already Fretilin's competitor, a coalition led by the National Congress for Timorese Reconstruction (CRNT) Party of former president and prime minister Xanana Gusmao, claims Fretilin is using its muscle in rural regions, where it is popular, to block their campaign.

In early March community leaders from six villages in Watulari sub district told local authorities they were rejecting efforts to conduct any flag raising in the villages.

On March 23, Taur Matan Ruak, another former president and head of the People's Liberation Party, a member of the coalition, tried to conduct a pre-campaign event in the sub district.

"Today some people told me that some Watulari people tried blocking my journey. I say to you nobody in East Timor even Fretilin will be able to stop me and Xanana Gusmao moving around," Taur Matan Ruak said at the time.

Mari Alkatiri, caretaker prime minister and secretary-general of Fretilin, on March 31 accused Gusmao and Taur Matan Ruak of trying bring down his government.

"Over the last seven months, the opposition's secret arm [Gusmao] was hiding abroad. Now he has returned he is trying to regain power — we should not allow him to," Alkatiri said to his followers during a pre-campaign rally in the capital Dili.

"I promise to you all my comrades, I will be deaf to their provocations."

On April 6, in the mountain district of Lete Foho Ermera, a group of people ambushed and stoned the vehicle of Jacinto Rigoberto, a member of parliament and vice secretary-general of CNRT.

"They targeted me. They stoned my car," Jacinto Rigoberto told ucanews.com after lodging a complaint with the police.

The president said he also hoped that parties will speak about the maritime agreement between Timor-Leste and Australia signed on March 6 in New York.

"The maritime border is national affair, not of any single party," he said, and believed that Xanana Gusmao, who successfully led the negotiations, will not exploit this success during the campaign.

Gusmao has held several public meetings explaining the new deal with Australia. Still, the crucial issues of where the gas will be processed — in the northern Australian city of Darwin or on Timor-Leste's south coast, has not been settled and until then, no fresh revenue can flow.

Deputy Fretilin chairman, Francisco Miranda Branco, said his party would ensure all its members maintain peace and stability, adding the party was optimistic it would win the election on May 12.

"Our goal for the next five years is to build from the peripheries, to address the lack of clean water, agriculture, education, electricity, and roads," he said.

Fidelis Magalhaes, who represents the People's Liberation Party said the three-party opposition coalition will follow the unity pact during the campaign and when the election results are revealed.

"The pact is a symbol of a democratic state, to strengthen bonds among parties," he said.

In last year's election Fretilin won 23 seats in the national parliament, followed by the CNRT with 22, PLP eight seats, Democrats with seven and Khunto with five seats.

For the May 12 election, there will be two other coalitions competing, namely the Front of Democratic Development, consisting of four parties and the Coalition of National Movement, also with four parties.