After resigning amid controversy 11 years ago, the African-educated lawyer makes a comeback 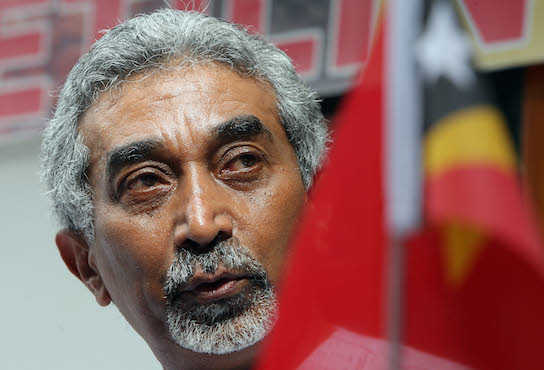 The secretary general of the ruling party Fretilin, Mari Alkatiri, answers a question during a press conference in Dili, June 26, 2007.

Muslim politician Mari Alkatiri, who quit as prime minister 2006 after four years as the mainly Catholic nation's first parliamentary leader after its independence, is set for a dramatic return to lead the government for the next five years.

The decision by the Fretilin-led coalition to endorse Alkatiri unanimously, ending the tenure of incumbent Fretilin Prime Minister Rui Maria de Araujo, came just a week after a coalition was formed between Fretilin, Democratic Party and Khunto and the installation of 65 new parliament members on Sept. 6.

On Sept. 12 party leaders were scheduled to meet President Francisco "Lu-Olo" Guterres, also a member of Fretilin for his rubber stamp approval.

Still, Alkatiri has not clearly agreed or rejected his nomination.

"I respect the party's decision, but give me time. We will have to get approval from the president," Alkatiri said.

In his 2006 speech the 68-year-old  Alkatiri said he was stepping down after heeding the call of President Xanana Gusmao to resign, to prevent further violence.

Asked about ministerial posts, Alkatiri denied speculation that this was the end goal of the coalition.

"We formed a coalition but it is not for the sake of ministerial seats but participation in serving the people," Alkatiri told reporters Sept. 11.

Camilo Ximenes, a political analyst from Timor-Leste State University, said that Fretilin's decision to endorse Alkatiri is a right decision.

According to Timor-Leste election law, the secretary general of the winning party will automatically be entitled to the prime minister post.

However, Ximenes said Alkatiri's nomination is not only because he is Fretilin's general secretary but he has the capacity drawn from his previous experience.

"The most important thing for the new government under his leadership is to guarantee the stability until 2022," Ximenes told ucanews.com Sept. 12.

The only issue now, Ximenes said, is that despite his capability to be the prime minister, Alkatiri may still be traumatized by the political situation that forced him to resign in 2006.

Alkatiri spent decades in exile in the African Portuguese speaking nations of Angola and Mozambique where he studied law before returning to Timor-Leste and successfully running for parliament and becoming the country's first prime minister in 2002.

Therefore, it's crucial for Fretilin to maintain political stability for next five years, by solidifying its coalition with Democratic Party and Khunto, as well as building good relationship with opposition parties, Ximenes said.

The National Congress for Timorese Reconstruction and Popular Liberation Party under the leadership of former president Taur Matan Ruak has refused to ally with Fretilin and chose to be in the opposition.

"Fretilin has to strengthen the coalition and build up good political communications with the rest of the political parties," Alkatiri said.

Most importantly, to garner support from society, the next government should be able to address key sectors, such as healthcare, education, agriculture, and empowerment of village people.

"The education budget should increase from 6 percent to more than 15 percent, to improve the quality of Timor-Leste people to be able to compete in Asian region," he said.

Father Herminio Goncalves, head of the Justice and Peace Commission in Dili Diocese, said Timor-Leste Catholics welcomed anyone, including Mari Alkatiri, regardless of their religious background to lead the country, as long as they put people first, not the party's interest.

"As Asia's most Catholic country we should set as model for democracy," Father Gonclaves told ucanews.com.

"The church needs someone who has principles and commitment to bring this country forward, out poverty and corruption," the priest added.

Chairman of the Democratic Party, Mariano Assanami Sabino, said being part of the coalition brings a new spirit to his party to work better for development of Timor-Leste community.

"We are ready to work with the government for the people," he told reporters.

The new prime minister is scheduled to announce cabinet members on Sept. 15. They will take their oath on Sept. 22.