Brawls in parliament bring calls for calm from Dili's archbishop A policeman asks motorists to observe social distancing rules amid the Covid-19 outbreak in Dili. Church people have called on legislators in Timor-Leste to concentrate on dealing with the virus following recent clashes among MPs in parliament. (Photo: Valentino Dariell De Sousa/AFP)

Archbishop Virgilio do Carmo da Silva of Dili has called on Timor-Leste’s lawmakers to sort out their differences after scuffles broke out in parliament.

Members of parliament should not put an added burden on the people who are trying to deal with the Covid-19 pandemic, he said.

The archbishop's call came after the legislature descended into chaos after several MPs demanded the removal of House Speaker Arao Noe Amaral.
Donate to UCA News with a small contribution of your choice

They accused Amaral of trying to obstruct the work of the country’s new coalition government by not scheduling a plenary meeting.

Scuffles broke out on May 18 when the parliament vice president Maria Sarmento tried to occupy the speaker’s chair.

The atmosphere became heated the following day when a number of tables and chairs in the chamber were damaged, accompanied by lots of pushing and shoving.

Amaral was later ousted as speaker in an impromptu election that saw Aniceto Guterres from the ruling coalition’s Fretelin party replace him.

The political chaos drew condemnation from the archbishop.

"A leader must be a role model for a new generation. They must bring peace to society, not create resentment when people are suffering from the Covid-19 pandemic," Archbishop da Silva said. "Our leaders have to find a solution to resolve this division."

Meanwhile, Amaral declared the election of the new House speaker “illegitimate” and not legal. 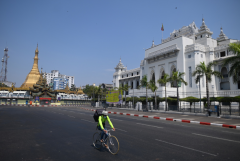 Rules say the speaker should call an election in parliament. "Change should be done in accordance with existing rules," Amaral told reporters, adding that he would take the matter to the to court for a ruling on the matter.

The new speaker dismissed his claims. "I garnered 40 votes, and that is legitimate," Gutterres said.Father Domingos Maubere, a parish priest in Dili, said he was saddened by the violence, adding he went to the parliament building to call for calm."I went there to show them the sadness of the people who witnessed the chaos and asked the parliamentarians to immediately resolve their differences and submit to the law," Father Maubere said.