Around 300 people attend the burial of Dr. Daniel John Murphy at Becusi public cemetery in Dili in Timor-Leste on April 16. The American doctor died of a heart attack at the age of 75 on April 14. (Photo supplied)

The people of Timor-Leste are mourning an American doctor who dedicated his life and skills for more than two decades to the health and well-being of Timorese people, particularly the poor.

Dr. Daniel John Murphy died of a heart attack at the age of 75 in Dili on April 14. He was still treating patients earlier that day. He treated at least 100 patients each day at the Bairo Pite Clinic he co-founded in Dili.

Born in Alton, Iowa, in September 1944, he received his medical degree from the University of Iowa in 1971. After his graduation, he served as a doctor during the war in Vietnam and in Laos and Mozambique.

He began working in Timor-Leste in 1998 at a clinic in Dili where he treated victims of Indonesia’s military. A year later, his presence and skills were much needed when many Timorese people were injured in political violence, including the Liquica church massacre in which about 200 people were killed by soldiers and police.

One day he asked to be buried within the clinic compound when he died. However, he said, his request could not be fulfilled because Timor-Leste law obliges people to be buried at a public cemetery, not in private homes.

“We plan to remove his remains next year and erect a monument dedicated to Dr. Murphy at the entrance of the clinic,” dos Santos told UCA News.

Due to the Covid-19 pandemic, the doctor’s two sons in the US could not attend his burial on April 16.

Timor-Leste President Francisco “Lú-Olo” Guterres expressed his deepest sympathy. He told a press conference that the people of Timor-Leste were blessed with the presence of Dr. Murphy, who had saved thousands of Timorese lives, particularly through his “clinic of the poor.” 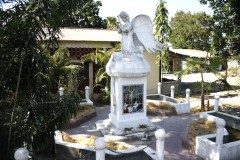 “For his work and dedication, we give the Sérgio Vieira de Mello Award and Medal of Merit to Dr. Murphy,” the president said. “I ask the staff and workers [of the clinic] to continue the splendid legacy of Dr. Murphy. I trust [our people] to your care.”

“In this era of globalization, humanitarian values and solidarity have faded, Dr. Daniel stands out from the crowd,” he told UCA News.

“With the simplicity, friendship and generosity he has shown through the clinic, he has become a role model for society, especially [Timor-Leste] doctors, to pay more attention to the little ones. Even in his old age, he never gave up and continued to dedicate his life for Timor soil.”

Monteiro said that during the 1999 independence crisis Dr. Murphy was often threatened by soldiers and militias for helping refugees in Ermera and Liquica districts, west of Dili.

He recalled an incident on July 4, 1999, when a convoy of 20 cars was stopped by a militia after distributing packages to refugees. One of the drivers suffered severe wounds to his head after being attacked with a machete.

“Dr. Daniel was taken to the police station for questioning and threatened, but he continued to motivate us to be brave to help others,” Monteiro said.

One of Bairo Pite Clinic’s goals is to free Timorese people from tuberculosis. It treats about 500 TB patients every year.

However, the clinic could not provide such a service in 2017 following the withdrawal of support from donors in Australia who wanted to charge for treatment.

Dr. Murphy wanted the clinic to be faithful to its mission for the poor, so he sought the help of his family back home, other countries and the government of Timor-Leste.

Dos Santos said the clinic spends US$40,000 to $50,000 every month and depends on people's generosity to survive.

“Although physically he is no longer with us, Dr. Murphy’s legacy will remain as our inspiration to work towards his goal, among others, to free Timor-Leste society from tuberculosis,” he said.

The clinic has 65 staff including six doctors. Some of those doctors received a scholarship from Dr. Murphy to study in the United States and Australia.

Dos Santos hoped that the noble cause of Dr. Murphy and his dedication would open the eyes of many people to help poor people in Timor-Leste.