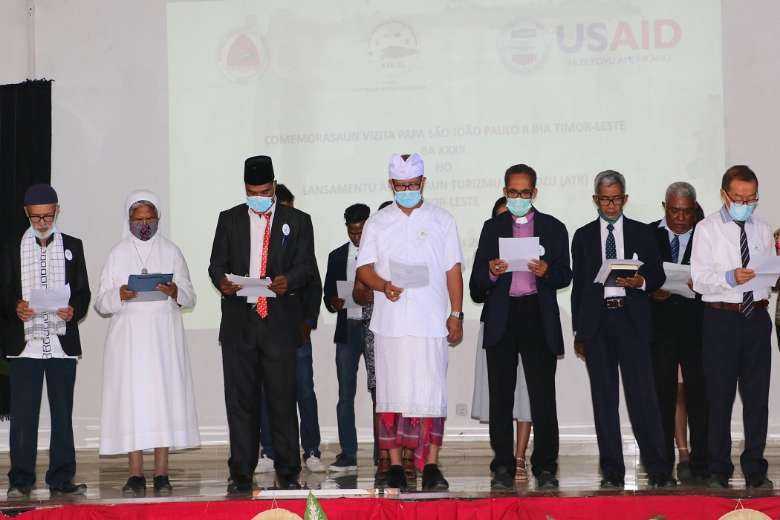 Timor-Leste religious leaders attend the launch of the Timor-Leste Religious Tourism Association on Oct. 12 in Dili. (Photo: Arlindo Soares/USAID Tourism For All Project)

Timor-Leste has officially launched a travel association bringing together all religions to promote religious tourism, a sector that the Catholic-majority country is seeking to develop to diversify its economy.

The launch of the Timor-Leste Religious Tourism Association (Asosiasaun Turizmu Relijiozu Timor-Leste), or ATRTL, was held at the Immaculate Conception Cathedral in Dili on Oct. 12.

It coincided with the anniversary of Pope St. John Paul II's visit in 1989 when the country was still under Indonesian rule.

Archbishop Dom Virgílio do Carmo da Silva of Dili and Monsignor Marco Sprizzi, the apostolic nunciature’s chargé d’affaires, joined senior government officials at the launch, which was also attended by representatives of the United States government, which sponsored the association’s establishment. The launch follows the association’s official registration in July when it received a US$110,000 grant from the Timor-Leste government.

USAID, the American government’s international development agency, said the new association seeks to capture a portion of the estimated $18 billion global religious tourism market in which, according to the UN World Tourism Organization, some 330 million tourists visit religious sites worldwide each year.

The move to form the association had been in the pipeline since 2018, with USAID support through the Tourism For All Project in which the country's religious leaders — Catholic, Protestant, Muslim, Hindu and Confucian — set up a working group to explore the potential for faith-based tourism and subsequently organized an international tourism conference.

“The next steps for the ATRTL include a national survey of faith-based tourism attractions and hospitality and tour guide training for young people. Association members are also discussing an annual interfaith festival and a plan to create a peace garden,” USAID said. The new association’s president, Father Angelo Salsinha, said that with the experience gained through USAID’s support “we will work more professionally to ensure our association’s sustainability and future well-being.” He said the development of religious tourism is not primarily for economic reasons but also for strengthening faith and unity among religions. Therefore, he said, he wants to make sure that respect for religion is a key priority as ATRTL draws up its strategic plan, a feeling shared by leaders of the other faiths represented in the association. He said the association allocated 50 percent of the US government grant to train community leaders and youth to accept faith-based tourists with respect.

He added: “It also helps to advance human rights and respect for differences.  Building on our respect for religious freedom and diversity, the US Mission to Timor-Leste hopes that the association will spur job creation for young people, bring prosperity to communities nationwide, and help Timor-Leste diversify its economy.”