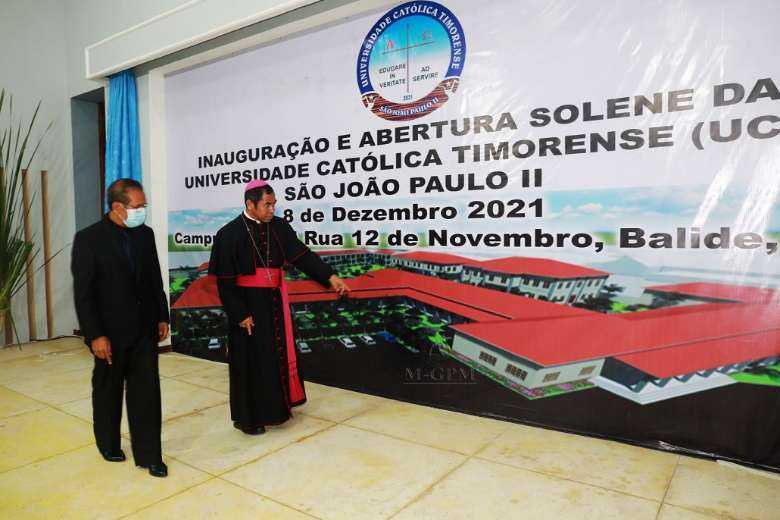 Timor-Leste has inaugurated its first Catholic university, dedicated to St. John Paul II who is considered to have inspired the country's struggle for independence.

Ruak said the university was dedicated to St. John Paul II — who visited the country while it was still under Indonesian rule in 1989 — "with whom our country has a great bond of love and devotion."

"Almost 20 years after the restoration of independence, with great joy, we celebrate the opening of the Catholic University of Timor, with patron St. John Paul II," said Ruak.

He said the university is a form of state support for the Catholic Church in assisting the integral formation of youth and adults in the Catholic-majority country so that they become "people of faith and develop to become more tolerant, just, inclusive, democratic and peaceful."

Archbishop Silva said the university had been a long-standing goal of the archdiocese and was first touted by Salesian Bishop Carlos Filipe Ximenes Belo and again by the late Bishop Alberto Ricardo da Silva.

“The Catholic University of Timor must provide a world-class education in all areas of human activity inspired by the Catholic intellectual, moral and spiritual traditions,” he said.

"We live today in the midst of socioeconomic and cultural realities that give us many challenges. On the other hand, we educate future generations to enter and survive in the labor market in today's social structure", he stressed.

The university will be open to students of other faiths. "There is no discrimination but indeed all rules must be in accordance with the principles and norms of our religion," he said.

The university is financed by the government through a subsidy every year given to Dili Diocese, half of which is focused on education. It is housed in a building used by St. Joseph High School in Balide on the outskirts of Dili.

He said all students must take a pre-semester course for six months to give them the opportunity to learn Portuguese and English.

"Of the faculties, we have about 20 departments but initially only a few departments will be opened. We will only accept 25 to 30 students per department," Father Pinto said.

The university has 50 lecturers and will bring in additional ones from Indonesia, Macau, Portugal, Brazil and other countries.