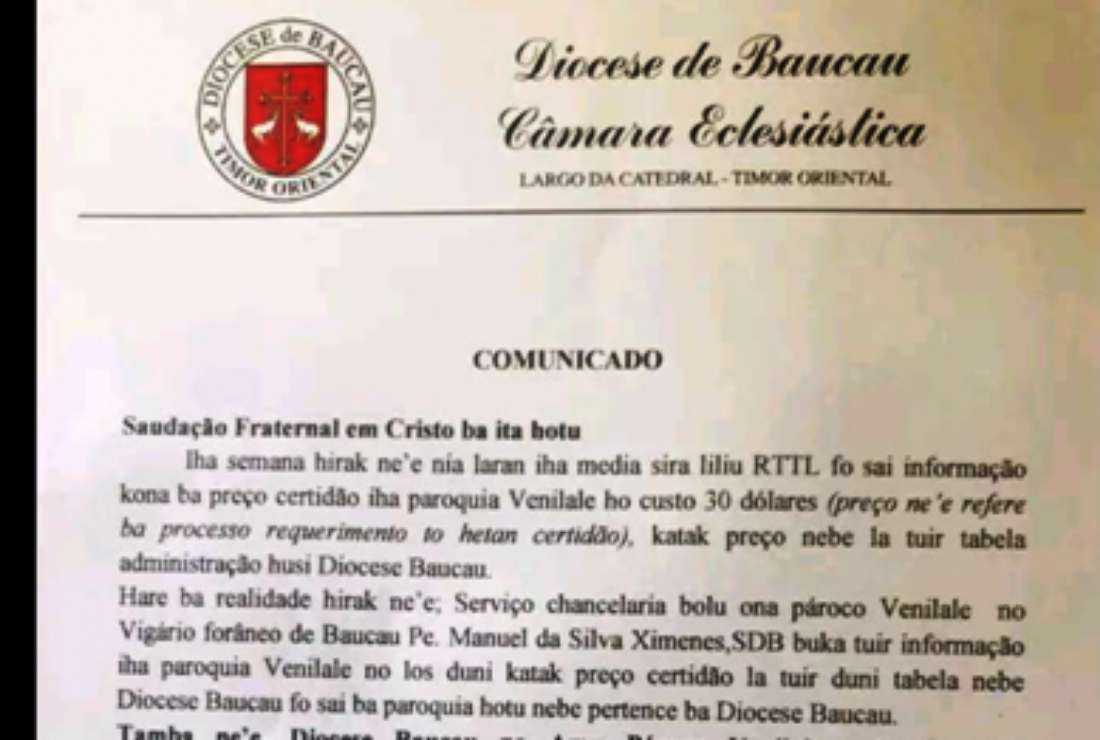 Timor-Leste’s Baucau Diocese has apologized for the controversial decision by a local parish to impose a heavy fee for issuing baptismal certificates.

Salesian Father Deonisio Soares, the diocese's vice chancellor, said in a communique on Aug. 10 that the policy of the Sacred Heart of Jesus Parish in Venilale to charge US$30 for issuing a baptism certificate was wrong.

He said the diocese had summoned the parish priest as the cost was not in accordance with what is being applied in the diocese.

"Therefore, the Diocese of Baucau and the parish priest apologize to all parishioners, especially the parishioners of Venilale for the mistake,'' he wrote in the communiqué in the native Tetun language.

He further invited Catholics to be actively involved in the affairs of the church.

“If there are problems or obstacles in the administration of parishes, please help to jointly find solutions and resolve the problems,” he said.

This issue was widely discussed after Timor-Leste Radio and Television, the national radio and television broadcaster, earlier this week reported the issue along with the parishioners’ objections to the policy.

Baucau Diocese is one of three dioceses in the country with 97 percent of its population of 1.3 million being Catholics.

The World Bank estimates that 42 percent of Timorese live in poverty. The country is ranked 141 among 187 countries in the United Nations Human Development Index for 2020.

The debate became intense after a Catholic priest, Father Mario Sousa, questioned the motives of those who accused the Church of corruption and posted about it on social media, making the case viral.

Meanwhile, members of other parishes spoke up saying they only need to pay US$ 5-10 for procuring a baptism certificate.

The communique, which was published on the official Facebook of the Baucau Diocese, received mixed responses from Catholics.

Malik Reloca, a parishioner of Baucau diocese, said that the diocese needs to discuss parish priests and set a uniform fee for the processing of baptismal certificates and other documents.

“This is important to avoid the wicked practices of irresponsible persons who mislead the parish, the diocese and tarnish the Catholic Church's name,” he said.

Salvar Mano said a mere apology for wrong policies will not do and the diocese needs to initiate strict measures to curtail such practices.