The sex abuse trial of an ex-priest in Timor-Leste has been put on hold for a fifth time after a bid to hold the hearing by video link was stopped due to “technical issues.”

The district court in Oecusse, 200 kilometers from Dili, resumed the trial that started in February via video conference on June 9 after Richard Daschbach failed to appear for four previous hearings, supposedly due to Covid-19 travel restrictions.

However, the American's legal team complained that a poor internet connection made it difficult for them to follow proceedings.

That prompted them to ask for a postponement until June 10 but judges decided to postpone the case to July 5 so that Daschbach can appear in person.

Daschbach is accused of sexually abusing children at a home he ran.

Lawyers for the alleged victims said proceedings were turning farcical and that this latest setback was proof of judicial bias against their clients.

Although he has confessed to being a pedophile, he still has broad support among Timorese

"There will never be real justice in Timor-Leste when there is no serious reform in the way victims are treated by the justice system," Maria Agnes Bere from Juridico Social Consultoria, a lawyers' group that fights human rights cases, said in a statement.

Ana Paula Marcal, executive director of the Judicial System Monitoring Program, a non-governmental watchdog, said the continuous delays would undermine trust in the legal system and could impact the victims and the evidence they prepared.

Daschbach is a former Divine Word priest who was dismissed by the Vatican in 2018 after he confessed to abusing children at the Oecusse-based Topu Honis children's shelter which he founded in 1993.

The 84-year-old is charged with child abuse, child pornography and domestic violence and faces up to 20 years in prison if convicted. He is also wanted in the United States for alleged wire fraud. 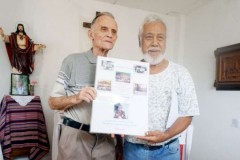 Although he has confessed to being a pedophile, he still has broad support among Timorese, including among the country's political leaders, who credit him with helping in Timor-Leste's struggle for independence from Indonesia.