The failure of the 2020 budget bill has triggered a fresh political crisis in the impoverished, mainly Catholic nation 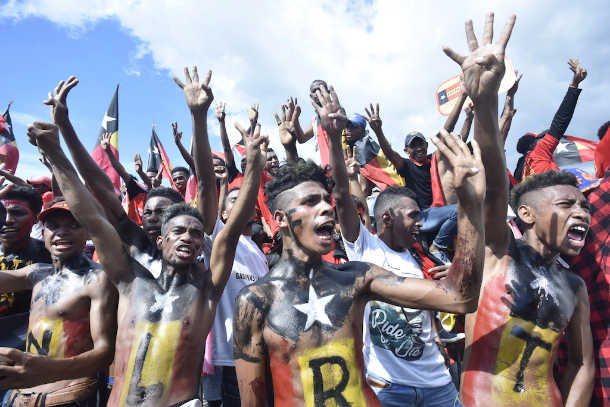 Timor-Leste people attend a general election campaign n Dili on May 9, 2018. The impoverished Catholic-majority country could be facing a third election in five years after another political crisis. (Photo: Valentino Dariell de Sousa/AFP)

The aging men leading Timor-Leste continue to put politics over the needs of citizens, most of whom remain in poverty.

Their mismanagement of the Catholic-majority country — one of only two in the Asia-Pacific region along with the Philippines — has led to the effective collapse of the government.

President Francisco “Lu’Olo” Guterres will begin talks on Jan. 23 aimed at finding a path to forming a new government from the existing parliament or the country could be facing a third general election in five years.

Timor-Leste’s health care, education and basic infrastructure, including electrical power and sanitation, are all in need of substantial investments.

The latest crisis flared up on Jan. 17 in another political game, ensuring that the budget of the struggling government of Prime Minister Jose Maria Vasconcelos, commonly known by his nom de guerre Taur Matan Ruak, would not be passed. It was the second attempt by Ruak at submitting a budget. A previous bill for record-breaking government spending of US$1.95 billion was withdrawn in October after pressure from all quarters, including within the ruling three-party Alliance of Change for Progress (AMP) coalition.

The latest budget sliced more than US$300 million off the previous one and was aimed squarely at big infrastructure projects, specifically the highly controversial liquid natural gas infrastructure project that is expected to cost US$12 billion. The tiny country has only US$16 billion in the bank. Spending on health, education and sanitation was slashed by double-digit percentages.

Timor-Leste is in a bind. The undersea oil reserves that deliver its vast majority of funds, held in a sovereign wealth fund that is tapped each year for budget funding, are forecast to be depleted by 2023. Care of a new treaty with Australia over maritime borders last year after winning a dispute in a United Nations court, the country now has access to greater undersea reserves. But to develop these and the associated infrastructure is very expensive and politicians are split over the project.

Poor budgeting aside, the rejection of the budget per se is still bad news for Timor-Leste: it means the AMP coalition that swept to power in the May 2018 election is in trouble. Ruak represents the minority People’s Liberation Party rather than the AMP’s main player, the National Congress for Timorese Reconstruction (CNRT), which decided to abstain, effectively killing the budget bill.

The reason for this is the CNRT’s frustration that Ruak has not been able to convince the president to install nine CNRT ministerial nominees who have been waiting for presidential approval since the 2018 election.

Indeed, on Jan. 21, Ruak said that the AMP coalition "no longer exists" after the leader of its largest party led the proposal to not vote for the general state budget for 2020. The political calculus is complex with two major parties, three significant minor parties and a handful of loosely aligned others.

Even more troubling, talks to resolves political deadlock in Timor-Leste have been known to drag on for many months and the country could be facing a return to the economic recession that saw its economy shrink in 2017 and 2018.

The reason for those economic bad times was the fact that a budget could not be passed because the minority government of the Fretlin party could not garner enough votes. When this happens, the government must fall back on monthly distributions equivalent to the previous year’s budget, with no new programs permitted to go ahead. In the present situation, it is unlikely any other legislation can be passed either.

Economic recessions damage the poor, especially those teetering on the very edges of society, far more than the middle class or wealthy — jobs begin to disappear, employees screw down pay and conditions, and credit its harder to get.

The Catholic Church has played a major role in Timor-Leste politics since its colonial masters, the Portuguese, abandoned the tiny half-island nation in 1975, leaving it to neighboring Indonesia, which occupies the other half of the island and the archipelago to its north and west.

Church leaders, many openly, supported the resistance forces that eventually triumphed with the help of Western nations led by Australia, leading to a referendum that saw the Timorese overwhelmingly vote for independence in 1999, something that came to fruition in 2002.

So central was the of the Church in this process that the bishop of Dili, Carlos Filipe Ximenes Belo, shared the 1996 Nobel Peace Prize with Jose-Ramos Horta, a Timor-Leste exile who had pushed for recognition of the country and intervention by United Nations forces and would later serve as its prime minister and in other senior roles. The two were honored for working "towards a just and peaceful solution to the conflict in East Timor," the Nobel committee said.

Since then, the Church has retained something of an informal role, with senior politicians and senior clergy in informal talks. Opinions vary on how much influence the Church retains but it is certainly a major player in health and education.

It’s also worth noting that Ruak and his wife are devout Catholics, easily the most devoted the country has ever had as prime minister. This may give the church hierarchy more say than usual in helping to fix the political crisis.

Still, with a visit by Pope Francis to Timor-Leste, Indonesia and Papua New Guinea looking likely late this year, that may give Ruak even more reason to try and cling on to lead a new government. Timor-Leste’s politicians have a history of putting their personal preferences before what might be good for the people.