Party official responsible for cross-removal campaign is leaving province, his career is 'finished' A file image of Catholics walking past the shadow of a cross at the entrance to the underground Zhongxin Bridge Catholic Church, after a service celebrating the Feast of the Ascension in Tianjin. Local government officials in Zhejiang province of Zhejiang have removed more than 1,700 plus church crosses since 2013. (Photo by Greg Baker/AFP)

Chinese Christians in the eastern province of Zhejiang are proposing that crosses taken down from churches during a government cross removal campaign be re-erected as way of celebrating the departure of an official responsible for their removal.

The proposal — made by some Protestants in the area — was sent out via social media not long after it was known that Xia Baolong, Communist Party secretary of Zhejiang, was being reassigned to Beijing.

The proposition to re-erect the church crosses was a way to "bid farewell" to Xia who local Christians hold responsible for the removal of 1,700 plus church crosses in Zhejiang since late 2013.

The reaction came after state-run Xinhua announced April 27 that Xia was appointed as vice director of the Environmental and Resources Protection Committee in the National People's Congress (NPC), China's parliament.

There were also some Protestant pastors who "suggested all churches in Zhejiang should hold a thanksgiving gathering and light firecrackers together to bid farewell to Xia Baolong, who is moving to Beijing," said a message posted on Wechat, the most popular social media in China.

Some Christian bloggers displayed icons of animated firecrackers-ignition in chat groups to show their delights to Xia's leaving, as the new post means effectively his political career comes to an end.

"It is general practice to send retired officials to specialized committees in the National People's Congress, which have no real power. Xia Baolong is 'finished,'" said Luke, a Protestant preacher in Zhejiang who also circulated the appeal.

Xia is now 65-years-old, the official retirement age unless getting promotion to the Politburo according to practices of the Communist Party.

Xia's new appointment was quite contrary to recent rumors that suggested he would attain a more important post in Beijing that would get him into the Politburo as many observers see him a close aide of President Xi Jinping. Xia was a subordinate of Xi when the latter was governor and Party secretary of Zhejiang 2002-2007. 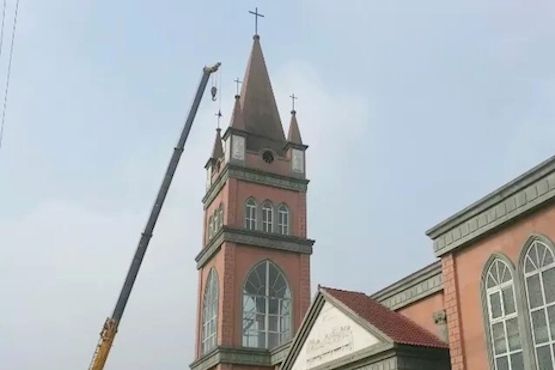 A screen grab of state-run TV shows Xia Baolong, Party secretary of Zhejiang, (middle) stressing the need of Sinicization during an inspection of a church property in 2015. (Photo supplied)

News of Xia's appointment came on the eve of the third anniversary of the April 28, 2014 demolition of Sanjiang Protestant Church.

The same social media appeal called on Christians to pray for the rebuilding of the Sanjiang Church in Wenzhou, a city in Zhejiang dubbed China's Jerusalem. The government said the demolition of the Sanjiang Church was due to the structure being illegally built. For a month Christians tried blocking state efforts to destroy the church, which drew world-wide attention.

In the name of a three-year city planning program, the cross-removal campaign began in late 2013.

Before the campaign subtly ended in April 2016, there were frequent reports of physical clashes between the security officers and Christians. Influential pastors and church leaders were likewise detained while lawyers to defend them were arrested.

The local authorities also introduced new regulation to limit the display of religious symbols to curb development of Christianity in the province.