Despite fine words and promises from political leaders, peace and reconciliation remain as elusive as ever 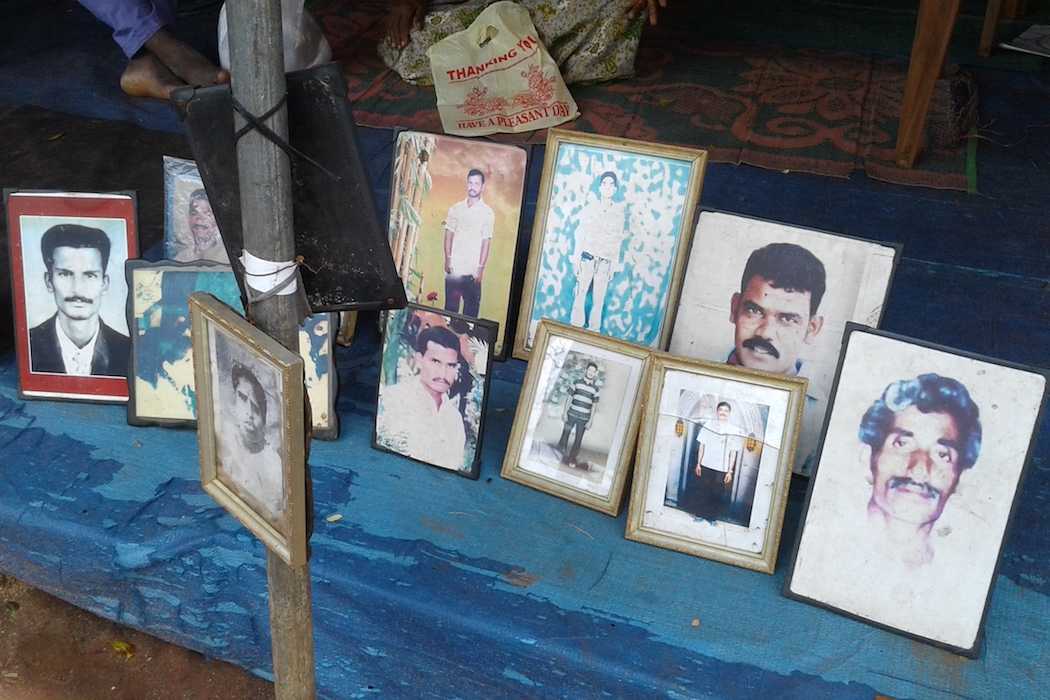 Relatives of disappeared people in Sri Lanka have been staging a demonstration since February 2017 at a 24-hour roadside hut in Vavuniya where they display photographs of their loved ones. (Photo by Quintus Colombage/ucanews.com)

The Sri Lankan civil war ended in May 2009. In 2010, Mahinda Rajapaksa was re-elected as president and his party, the United People's Freedom Alliance, won a landslide victory in the parliamentary election due to the defeat of the Liberation Tigers of Tamil Eelam (LTTE).

Even though the victors promised many policy changes for all the people, they were unable to bring in a new set-up to establish true peace, reconciliation and coexistence between the Tamils and Sinhalese. Instead they only thought of remaining in power by bringing in many changes to the constitution — and the people did not oppose such moves by the leaders.

The U.N. Human Rights Council, Amnesty International and others wanted to have inquiries into war crimes in the last stages of the conflict. The response from the government and armed forces was a denial of war crimes.

In the pre-war era and during the conflict, any discussion about peace was taboo to political leaders and most civilian groups. The concept of a "just war" was applied by stating that the LTTE was instrumental in starting the war in 1983. Many peace attempts by international and local groups did not succeed due to these wrong conceptions regarding peace negotiations.

The fear of sanctions brought an early presidential election in January 2015 when Maithripala Sirisena surprisingly beat Rajapaska. This time the winner was a non-party candidate but he very soon forgot about his promises. Social media made a vital breakthrough to defeat the all-powerful Rajapaksa. Even after his defeat, he claimed that he was defeated by international power groups.

Civil society groups had highlighted government corruption and accused Rajapaska of making undemocratic changes to the constitution so that he could rule forever.

In the parliamentary election in August 2015, a national government was elected with the support of minorities to establish true peace and reconciliation in Sri Lanka.

However, no discussions were possible. The agenda was set by Sinhala leaders and Tamils were considered as mere objects. The land was occupied by the armed forces, while the Buddhist religion was forcibly established in regions where Buddhism was almost non-existent. Tamils who migrated to the other countries did not want to come back to their mother country because they did not see any future for them.

Even though the new leaders promised to bring culprits to book, these promises have not yet materialized. Independent commissions did not have the will to exercise their legal powers to curtail corruption.

Peace talks were thought to go against the views of the majority ethnic group. Anyone who spoke of peace and reconciliation was considered part of an anti-national movement sympathizing with separatist groups such as the LTTE. Anyone from civil movements, NGOs or religious groups trying to bring proposals for greater harmony between the Sinhala and Tamil communities was disregarded by the majority Buddhist and pro-Sinhala groups.

Some people attempted to launch peace projects. Although there were attempts to learn from the South African model for these projects, they did not bring any real results.

Sri Lankan political leaders were praised by international leaders for their brave attempts, but they remained only at a conceptual level. Tamil leaders thought that peace meant a separatist country in their areas. This was because Sinhala political leaders did not think of Tamils as equal citizens. Even when a minority Tamil leader was given the post of leader of the opposition, many in the majority spoke against such a move.

The new leaders were expected to bring in true reconciliation, peace and harmony after nearly 30 years of conflict. But for the last three years they have failed to reduce violence in the country. The divisive attitude of the majority prevails, creating second-class citizenship for some minorities.

The new leadership who promised so much for the country followed the earlier regime with corrupt practices and eventually lost the confidence of most voters, as seen in the local government elections held in February.

This year has seen riots directed against Muslims by fundamentalist Buddhist leaders. Anti-Muslim and anti-Christian attitudes prevail in the political set-up.

The Christian community had members in both warring parties in the civil war. Leaders and members of Christian denominations failed to come together to address reconciliation after the war ended.

Church members must realize that peace is also part of the mission of the Christian community. I beg and pray that Christians of all denominations come together to achieve peace, reconciliation and harmony beginning with transitional justice.

Father Reid Shelton Fernando is a university lecturer and former chaplain of the Young Christian Workers movement. He is well known in Sri Lanka for his writing and commentaries on social and political issues. He is a human rights activist and submitted a list of disappeared priests' names to a government-formed commission.