Protesters take part in a rally in Brussels, Belgium, on Oct. 1, the 70th anniversary of the establishment of the People's Republic of China. The protest was organized by the World Uyghur Congress, the International Campaign for Tibet, the Unrepresented Nations and Peoples Organisation, the Belgian Uyghur Association and the Tibetan Community in Belgium. (AFP photo)

With every passing week, there is a new story about the increasing repression of mainland China’s Catholics — as well as its Protestants and Muslims — as leader Xi Jinping’s ruthless policy of “sinicization” of religion continues to be implemented.

This is becoming increasingly problematic for the Vatican and will be the elephant in the room during Pope Francis’ upcoming trip to Thailand and Japan. Catholics across the region, particularly in mainland China, Hong Kong and Taiwan, will be eager for him to address the issue during the trip.

It is inconceivable that he won’t be asked the question on the papal plane, and the pontiff's history tells us he will have an answer. Quite what that will be will be fascinating as the trip begins almost 14 months after the inking of the historic but controversial deal between Beijing and the Holy See on the appointment of bishops.

The deal was years in the making, and at first blush the Vatican has undoubtedly given away more at the negotiating table than China: Pope Francis reinstated seven excommunicated bishops (and one deceased prelate). They were the ones promoted by the state-run Chinese Catholic Patriotic Association (CCPA) — now controlled by the ruling Communist Party’s powerful United Front Work Department — and the Catholic Chinese Conferences of Bishops, which the Vatican does not recognize.

But Beijing’s move to recognize some 30 Vatican-appointed prelates working in the so-called underground church, which operates unofficially and outside the control of the CCPA, has been slow. Beijing has recognized only two of them, and that only in August. Many at the time of the deal believed it was the start of a process that would have seen regular names added to Beijing’s list, but things have gone quiet once more.

What we do know is that Vatican negotiators have been hard at work fleshing out still-secret details, including the synthesization of the Vatican-approved dioceses and those having the imprimatur of Beijing. This clearly affects the bishops. The Vatican dioceses date ­­back to the 1940s before the communists won the civil war. That China has changed since then is an understatement, with massive demographic shifts involving hundreds of millions of people. It would be simple for the Vatican to fall in line with Beijing’s dioceses.

But while such things as diocesan boundaries and bishop appointments are relatively easy to negotiate, far more problematic is the continued split between the official and underground churches. While the pope has encouraged synthesization, he has also allowed priests and bishops to make a decision on whether to join the CCPA as one of conscience.

Reporting by this publication and others makes it clear that many in the underground will stay that way and the key benefit that Beijing hoped to achieve with the deal now remains out of reach.

Since the deal was signed, Beijing and various provincial governments in China, particularly Hebei, the province that surrounds Beijing and China’s most Christian province by sheer numbers, have continued to ramp up the campaign of sinicization — a process that means moving the loyalties of worshipers to focus on Beijing. It is an effective nationalization of religion but it is not unprecedented. For example, in the Church of England, the reigning monarch, presently Queen Elizabeth II, is the head of the church.

Pictures of former dictator Mao Zedong and China’s present authoritarian leader Xi Jinping are placed in churches and Chinese flags raised outside. For underground Catholics and followers of other religions, this is precisely the reason they have chosen to remain in unofficial churches. There was a clear separation of their spiritual life from the state. This should be causing significant consternation inside the Vatican. 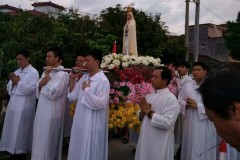 Beijing is also using the regulatory tools of government, particularly property laws and prohibition of minors participating in church services, summer schools and other activities.

This is firing a bullet into the very heart of evangelization, crimping the future supply of worshipers and church leaders. If the Vatican is concerned about pictures of dictators adorning church walls, the threat posed by the bans on minors should have people in Roman corridors in conniptions. Reams of regulations have been issued, often specifically designed to bring poor rural parishes into conflict with the law by their multiple regulatory impositions.

Some priests are believed to be imprisoned. Chinese authorities continue the program of regularly detaining priests deemed problematic by Beijing, or preventing them from participating in religious festivals. Online sales of the Bible and other Christian books have been forbidden.

Beijing was hoping the bishops deal would give it greater control over China’s 10-12 million Catholics with the Vatican’s backing. Precise numbers of those belonging to the official and underground churches are difficult to pin down, but a rough consensus is that this is roughly split half and half.

Such control would then, Beijing hoped, lead to diplomatic recognition from the Holy See, the only European state that still recognizes Taipei over Beijing. The combination of events that has pitched Hong Kong against its authoritarian masters in Beijing is meant to be a strong warning to Taiwan that Xi Jinping is coming for it. After all, its reunification with the mainland remains the Communist Party’s greatest wish.

It’s hard to see the Vatican prepared to suffer the international ignominy of deserting its Taiwanese flock and in any way assisting in this process.

Finally, there is the unspeakable horror of Bejing’s treatment of Muslim Uyghurs in Xinjiang state. An estimated 1-2 million have been rounded up and forced into concentration camps designed to have them renounce their religion. A report recently verified that 150 people have died in the camps. The real number certainly should be more, not to mention credible reports of systematic torture and rape.

This has put Xi in the exclusive mass murderers' club of gulag operators along with Adolf Hitler and Joseph Stalin. And it is now not beyond the realms of possibility that similar treatment may be meted out to Christians who will not fall in line with state edicts.

On this evidence, Pope Francis and his Secretary of State Cardinal Pietro Parolin, the architect of the Beijing deal, should be seriously wondering if the Vatican's links with China can, in all Christian conscience, be taken any further.

Hopefully, we are only a week or so away from getting some rare insight into their thinking.