Time for Nepal to smash the chains of injustice

How much public outrage will it take to fix a broken justice system, riddled with graft, delays and political protection? 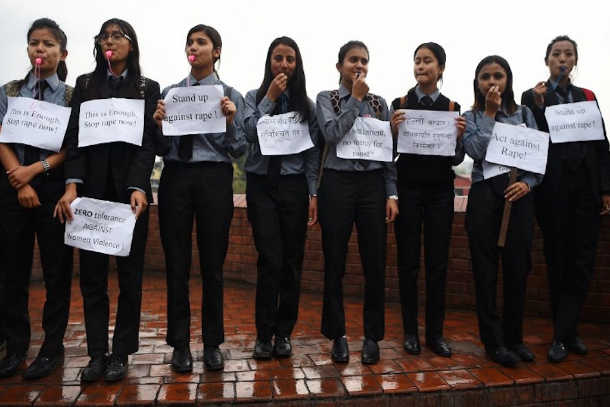 Nepali activists take part in a "whistle rally" against rape in Kathmandu on April 4, 2018. Three months later, on July 26, nationwide protests would break out after 13-year-old Nirmala Panta was raped and murdered, her body found the next day in a sugarcane field. As of Feb. 4, 2019, no one has been charged. (Photo by Prakash Mathema/AFP)

Some people say that when justice is delayed it is diminished, but I would argue that as long as full justice is not granted, then people are being denied their full human rights.

"Justice" is a vague and abstract concept offering legal remedies that deal with rights and obligations, claims and compensation.

Nepal's justice system remains plagued by various problems 12 years after the insurgency period ended, but the long-running culture of impunity — the guilty getting away with their misdeeds — is clearly at the core.

This was brought to the fore in November when Prime Minister KP Sharma Oli plastered Kathmandu with illuminated signboards bearing slogans promising "The Start of a New Era" (Naya Yuga ko Suruwat).

The same slogans could be read on the front pages of national dailies and across social media, as they introduced KP Oli's new social security scheme to "benefit people from all walks of [life in] the nation."

Such was his megalomania — as, of course, he would have to take personal credit for "saving" the nation — the premier even filmed a video message to hammer home his message that the future would be brighter for the public. He even dedicated Nov. 27 as Nepal's first Social Security Day.

Fortunately, the premier is a popular figure in Nepal due in part to his charm, grand ambitions and sense of humor. But the social security scheme, based on contributions, must stand as one of his most ambitious projects to date.

According to one member of the group, the point was to highlight the hypocrisy of the government, which was boasting it could protect the vulnerable with increased welfare but was unable to keep women, especially girls, safe from physical and sexual abuse as well as human trafficking.

This is why the slogan was attached to posters of Nirmala Panta, a 13-year-old girl who was raped and murdered in Nepal on July 26 last year.

Her body was found dumped in a sugarcane field the next day, sparking nationwide protests during which several demonstrators also died.

Within a day of its release, the counter-slogan had gone viral. It was splashed across everything from buses to social media (#JusticeForNirmala) and was even replacing KP Oli's posters.

The government mobilized its security forces to clear the offensive posters from public view, but it was too late. The damage had been done, and the premier's sincerity had been thrown into doubt.

Police issued warnings in various cities and arrested those attempting to put up more of the posters, but KP Oli's reputation had taken a major hit.

The campaigners were not able to keep confronting the government directly, so they found a new way of using Nirmala's image: in the form of stickers that could be pasted onto vehicles, laptops, bags, jackets, caps and so on.

Despite this national outpouring of grief and rage, and marshaling of state forces, however, the perpetrator (or perpetrators) have yet to be found.

Some have accused the police of being reluctant to investigate the case as it may have involved some high-profile figures, although that has yet to be confirmed and remains only a rumor.

Police had to crack down on some of the more stirred-up protesters, which resulted in the death of at least one boy with dozens more people injured.

A number of arrests were made but no charges were pressed and these were later interpreted as little more than a diversionary tactic to focus people's attention and try to deter others from joining in the rallies.

How can the authorities frame innocent people while locals are accusing high-level police officials of trying to shield the murderers?

Hundreds of Nepali girls are raped every month. Nirmala's case reminds us that few families see justice served, while those that do often have to contend with unacceptably long delays.

Activists have resorted to all manner of tactics to get the government to own up to past mistakes, but many have failed.

One example would be Nanda Prasad Adhikari. He went on a hunger strike in 2013 demanding answers to the more than 60,000 cases of missing people during that turbulent period when rebels attempted to overthrow the Nepalese monarchy and establish a People's Republic.

Nanda lost that battle when his heart gave in on the 333rd day of his fast in September 2014.

His wife and he had begun by demanding justice be served for their son, Krishna Adhikari, who was abducted and killed during the Maoist insurgency in 2004.

After the Comprehensive Peace Accord (CPA) was signed in 2006, they waited until July 2013 before embarking on their fast-unto-death. That appeared to have come to a satisfactory conclusion on Sept. 7 when a three-point deal was reached with the government.

But the couple were to be disappointed again.

Even though the CPA recognizes Nepal's obligations under international human rights laws without reservation, the government failed to fulfil its commitment and they resumed their fast on Oct. 24.

Despite the authorities claiming they would follow the Supreme Court's directive and investigate the killing, only two of 13 people arrested made it to court, and both were granted bail due to political protection.

To say there were serious flaws and shortcomings in the investigation would be an understatement.

Now Nanda's wife, Ganga Maya, is trying to internationalize the case through various U.N. agencies while her husband's body remains unclaimed at a government teaching hospital in Kathmandu. The family appear to be making a statement by not claiming the body until justice is served.

Both cases highlight Nepal's flawed attempts of justice. Nanda made the ultimate sacrifice in seeking justice for his son, but he should never have had to surrender his own life.

Like that unfortunate couple, the thousands of people who have campaigned on behalf of Nirmala symbolize everyone whose dignity has been degraded in Nepal due to the lack of access to justice.

Meanwhile, the Commission on the Investigation of Enforced Disappeared Persons and the Truth and Reconciliation Commission are believed to have conducted countrywide hearings and gathered over 60,000 cases, but when these cases will be addressed remains unclear.

The law has not been enforced universally but unequally, discriminating against the weak and powerless and in favor of the rich and powerful.

Of course, we cannot resuscitate the dead. But we can show their families and the rest of society they did not die in vain, that we are still carrying the flag in the fight for truth and justice, and that we will not quit.

The goal is an effective justice system. We are all morally bound to work toward that goal because we never know when we may find ourselves in a similar situation.

The rule of impunity based on political protection has to be broken, not just in Nepal but everywhere.

These chains are not easy to break, but they can be smashed if we all join hands and refuse to accept anything less than the proper implementation of the rule of law.