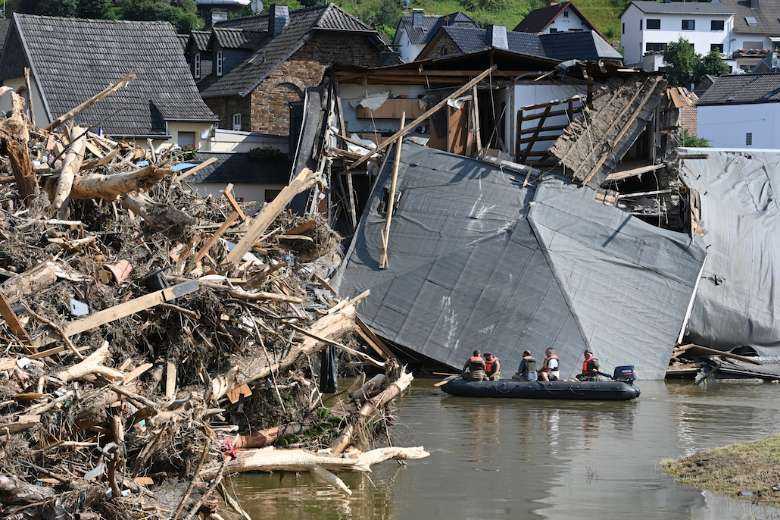 Military personnel on a boat on the Ahr River as the roof of a damaged house hangs in the water and uprooted trees are seen in the foreground in Rech, Germany, on July 21 after devastating floods hit the region. (Photo: AFP)

The deadly flooding in Germany has left a trail of devastation with some 160 people killed, more than 170 missing and thousands of homes flooded.

The intensity and scale of the deluge that shocked climate scientists was a result of record-breaking rainfall of 148 liters per square meter within 48 hours in wide areas of the Rhine river basin, nearly double the average 80 liters of rainfall in July.

Other countries including Belgium, the Netherlands, Switzerland and Luxembourg also took a hit as floodwater and mudslides leveled homes and buildings.

The disaster came about two weeks after a deadly heatwave swept through Canada and the US when temperatures soared to 49.6 degrees Celsius.

German Chancellor Angela Merkel, who is to retire in September after 16 years, has been touring the most affected regions to monitor and coordinate the humanitarian response to devastated communities.

Along with the government, the Catholic Church in Germany has joined the humanitarian response and in some places Catholic groups were among the first responders to the crisis aftermath.

However, such an emotional call for prayer and solidarity with flood-hit Germans has not resonated strongly in Asian churches

The devastation and loss of lives have triggered shock and sympathy from across the globe including from Catholics in Asia and other parts of the world.

Pope Francis offered prayers and expressed his closeness with the flood victims of Germany.

"His Holiness remembers in prayer those who lost their lives and expresses to their families his deepest sympathy," Cardinal Pietro Parolin, Vatican secretary of state, said in a telegram message to German President Frank-Walter Steinmeier.

"He prays especially for those who are still missing, for the injured and for those who have suffered damage or lost their property due to the forces of nature."

However, such an emotional call for prayer and solidarity with flood-hit Germans has not resonated strongly in Asian churches, most of whom are regular beneficiaries of charitable funding from the German Church and church-based donor agencies.

The Catholic Church in Germany, one of the richest in the world, is well known globally for its charity and philanthropy. It is a major contributor to many organizations and charities linked to the Vatican, the administrative headquarters of the global Church.

A principal source of income for the German Church is the voluntary church tax and government donations for operating costs. It also has sizable earnings from other sources such as fees, social projects and churches' own wealth.

Media reports suggest the income has been declining in recent years as the number of churchgoers and practicing Catholics drop in Germany as well as in other parts of Europe.

The draining of church members is not a new phenomenon. Church leaders in Germany have taken note of the crisis and some described it as “a financial cross” for churches.

"The Church's decreasing income and increasing expenses have led to a clear deficit," the late Cardinal Joachim Meisner, former archbishop of Cologne, lamented in 2004.

While churches in Germany and other parts of Europe lose members fast, churches in parts of Asia and Africa continue to experience a springtime of growth.

Yet the German Church and its pastoral donor agencies, including Caritas Germany, Misereor, Missio Aachen, Missio Munich, Renovabis, Aveniat, Pontifical Mission Societies Germany and Aid to the Church in Need, funnel millions of dollars to relatively poorer churches in Asia, Africa and Latin America every year.

In fact, it would be extremely challenging for minority churches and church groups in Asian nations to carry out religious, pastoral and social activities, including formation and training of clergy, religious and laypeople, charitable services to poor communities, socioeconomic development, media activities and renovation and construction of churches, without funding from generous Germans.

In times of humanitarian crises triggered by natural disasters like cyclones and flooding and conflicts and persecution targeting Christians in Asia, Catholics in Germany and Europe are among the first to reach out with generous donations, sympathy and prayers.

Most churches in Asia are minority except for those in the Philippines and Timor-Leste. Due to a lack of resources — economic and non-economic — it will take many years before they can expect to become self-reliant.

However, there are dioceses in countries such as South Korea, Japan, Thailand, Singapore and Taiwan that could well be called rich and require no foreign donations like poor churches in other parts of Asia.

Already some of them, such as Seoul Archdiocese in South Korea, are funding poor churches in Asia and Africa. During the Covid-19 pandemic in India and the crisis in Myanmar, churches in Asia have lent their hands to affected communities in those countries with funds and solidarity in prayer.

Now it is time for Asian churches to stand with beleaguered German brothers and sisters who are still reeling from a deadly natural calamity. It is a matter of fact that not all churches have the capacity to return the favor economically. But that does not bar churches in Asia from reaching out to Germans and others affected in Europe in the form of prayer and solidarity.

Let’s not forget that no matter how rich or powerful, everyone needs support in times of crisis.