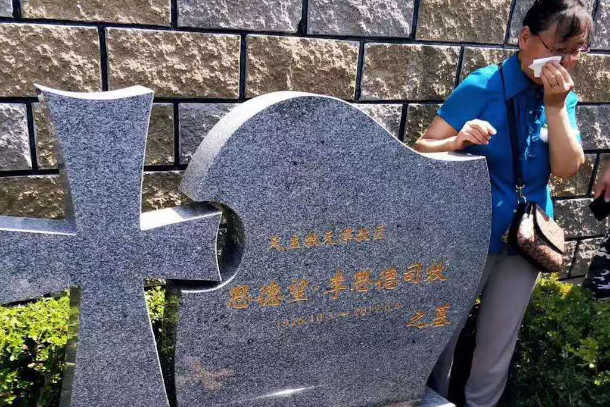 Bishop Stephen Li’s headstone refers to him as a pastor because he was not recognized by the government. (Photo supplied)

The funeral of a Chinese underground bishop was held under strict government control and underground priests were only allowed to attend part of it.

Bishop Stephen Li Side of Tianjin died at the age of 92 on June 8 after suffering a stroke in mid-May and being admitted to a hospital in Ji County.

Underground Coadjutor Bishop Shi Hongzhen, who will eventually succeed Bishop Li, was not allowed to attend his funeral on June 10. A source said Bishop Shi had been under 24-hour surveillance by local authorities who had restricted his movement.

State-sanctioned Tianjin Catholic Patriotic Association was put in charge of the funeral. When underground priests asked officials to allow Bishop Shi to hold the ceremony, the request was rejected because Bishop Li and Bishop Shi were not recognized by the government.

Police kept an eye on underground priests on June 10 to prevent them from attending Bishop Li’s burial ceremony.

The funeral was held by Father Zhu Lige, who is a member of a government religious commission in Tianjin.

Bishop Li’s headstone named him only as a pastor because he was not recognized by the government as a bishop.

A local Catholic said Bishop Li’s death led to many messages on the internet. “However, they were deleted quickly and I think it was done by authorities,” he said.

Father Paul, a diocesan priest of the open church community, told ucanews.com that he had visited Bishop Li several times in the past year to seek his advice. However, the bishop was always aware of being monitored and invited priests to go to an inner room so that it was safer for them.

Bishop Li was born on Oct. 3, 1926, in Zunhua city in Hebei province in a Catholic family with several generations of faith. He committed himself at a young age to dedicate himself to serve the Lord. He entered a minor seminary at 13 and joined St. Vincent Seminary in Beijing in 1949. He was ordained as a priest in Tianjin Diocese on July 10, 1955. He was ordained as bishop of Tianjin in 1982.

Bishop Li was arrested in 1989 after attending a Chinese Bishops’ Conference meeting that was not recognized by the government. He was arrested three times in his life and was imprisoned for more than 20 years.