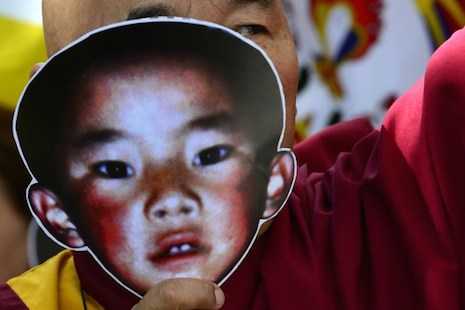 Tibetans on Sunday urged Beijing to release the Panchen Lama on the 20-year anniversary of his detention by Chinese authorities.

Once known as the ‘world’s youngest political prisoner’, the then six-year-old Gedhun Choekyi Nyima disappeared three days after he was anointed by the Dalai Lama as the second-most important Buddhist figure in Tibet.

“The sole purpose of abducting the Panchen Lama is to deprive him of Buddhist studies and thereby hindering his spiritual influence on the future Tibetan generations,” Penpa Tsering, speaker of the Tibetan parliament in exile, said in a speech on Sunday to mark the anniversary in Dharamshala, India.

Tibetan campaign groups held candlelit vigils to mark the anniversary in protests outside Chinese embassies and consulates in cities including New York and London.

The government and China’s heavily shackled media have made no mention of the Panchen Lama as Beijing maintains silence over his whereabouts.

Following Gedhun Choekyi Nyima’s detention on May 18, 1995, the government said it was necessary to protect him from being “kidnapped by separatists”, and later insisted he had attended school and was leading a normal life.

Six months after his detention, Beijing appointed its own Panchen Lama, Gyaltsen Norbu, following a controlled process the government said was based on a ceremony first established under the Qing Dynasty in the late 18th century.

The issue remains a serious point of contention as exiled Tibetans, and reportedly many inside the Himalayan region, continue to reject Beijing’s choice.

The 79-year-old Dalai Lama has said he views the process as a government dress rehearsal for his own death, accusing the Communist Party of “brazen meddling in the system of reincarnation”.

During a rare speech at political meetings in Beijing in March, Gyaltsen Norbu delivered what has been interpreted as a thinly veiled attack on China’s religious policy in Tibet, the first sign Beijing’s choice may be deviating from the party line.

Noting that Tibetan monks feel their numbers are too few, a reference to Beijing’s rarely acknowledged quotas imposed on monasteries, the 11th Panchen Lama warned there is “a danger of Buddhism existing in name only”.