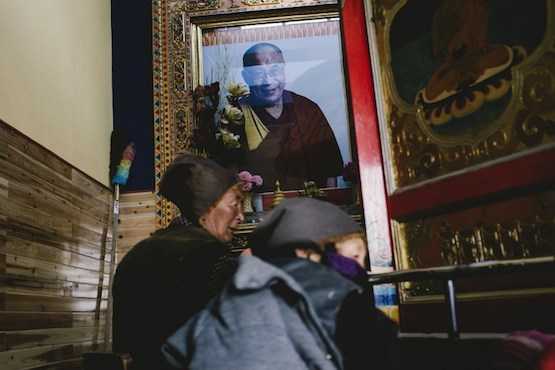 In this photo taken on Dec. 9, a group of Tibetans spin a prayer wheel under a portrait of the Dalai Lama at Kirti Monastery in Aba, a Tibetan area of China's Sichuan province. A ban on displaying the spiritual leader's image has been met with resistance in the autonomous region. (Photo by AFP/Benjamin Haas)

Police and the Bureau for Religious Affairs issued a notice across the Tibetan county of Drango in January making a rare admission.

About 40 percent of the shops in this mountainous area of 50,000 people in western Sichuan province were selling pictures of the Tibetan spiritual leader the Dalai Lama. These were ordered removed by Feb. 2.

Announcing the campaign was to eliminate "pornography and illegal publications" ahead of the Chinese New Year, the nationalist Global Times said hanging the Dalai Lama's image "was the same as displaying Saddam Hussein's image would be for Americans."

Ordinary Tibetans have fought cyclical campaigns banning the Dalai Lama's image for decades since he went into exile in 1959. As his reincarnation moves ever closer — a source of dispute between the Dalai Lama and Beijing — propaganda and control of his image has only intensified.

In open defiance of the recent ban, thousands of Tibetan Buddhists held a prayer ceremony in Drango to pray for the spiritual leader's health while he was being treated in Minnesota on Jan. 25. A video circulated online showed people standing and kneeling, hands pressed together, in front of a giant image of the Dalai Lama in this remote corner of Sichuan province.

"While this doesn't breach the letter of the ban — which applied to the sale of his image — it clearly breaches the spirit, which local residents will have known," said Alistair Currie, campaigns manager of the London-based Free Tibet.

Later, police arrested two high-ranking monks from Chongri Monastery in Drango for organizing the event. Barely a month goes by without someone being arrested in the administrative region of Tibet and surrounding Tibetan areas in the neighboring western provinces of Sichuan, Qinghai and Gansu.

In December, a video showed a young man walking through the streets of Ngaba county carrying a portrait of the Tibetan spiritual leader and its former flag. He was later arrested, reported Free Tibet.

A month earlier, two monks were reportedly sentenced to four and three-and-a-half years in prison for separate, similar protests displaying the Dalai Lama's image while calling for a free Tibet.

A symbol of Tibetan aspirations for more autonomy than Beijing is willing to allow, the Dalai Lama's image has taken on political as well as spiritual meanings. And signs are that Chinese security forces plan to expunge the Tibetan spiritual leader's image from every corner of the Tibetan plateau, part of the end game to crush resistance as he moves toward the twilight of his life. Beijing clearly hopes that if it can seize control of the Dalai Lama's image, it may eventually win hearts and minds — at least after Tibet's spiritual leader dies.

In June last year, China announced it had finished installing televisions in every one of Tibet's nearly 1,800 Buddhist monasteries, a policy that took three-and-a-half years to implement. Many monks were required to ship television sets on horseback across high Himalayan passes.

Far from providing Tibetan monks with entertainment, the move was designed to prevent televisions from displaying images of the Dalai Lama inside monasteries.

"By listening to the radio and watching television, monks and nuns have a more intuitive understanding of the party and country's policies, laws and regulations, ethnic policies and religious policies," reported the state-run Tibet Daily.

During the same period, authorities posted notices in monasteries warning of fines of 5,000 yuan (US$800) to those that did not get rid of old satellite television systems. Many were able to pick up Tibetan news from exiled broadcasters based outside of China including Radio Free Asia — funded by the U.S. government — which began its first satellite bulletin during the Tibetan New Year last February.

"The Chinese government is trying really hard to try to stop Tibetans from getting any information from outside," Tsering Tsomo, director of the Tibetan Center for Human Rights and Democracy based in Dharamsala, India, told ucanews.com during the campaign last year.

Instead of displaying images of the Dalai Lama, Buddhist monasteries have recently been ordered to display images of Communist Party leaders and Chinese flags instead.

Earlier this month, 70-year-old monk Trigyal died in detention after being accused of throwing Chinese flags into a river instead of installing them on a monastery in Driru County. He served two years of a 13-year prison sentence.

"Making the Tibetan people choose between the Dalai Lama and the Communist Party when there is space and opportunity to coexist only leads to deepening the wound in the hearts of the Tibetan people," said Bhuchung Tsering, vice president of the International Campaign for Tibet based in Washington D.C. "China does not care about the Tibetan way of life."

On occasions authorities have proven unusually tolerant of the Dalai Lama's image, however. In mid-2013, international media and campaign groups started reporting that authorities had started to allow veneration of the Dalai Lama in monasteries including in Lhasa, Tibet's capital, for the first time in 17 years — a move denied by authorities in Beijing.

With so little information coming out of Tibet and a lack of transparency from authorities, it remains difficult to know why enforcement of a ban on the Tibetan spiritual leader's image has been so erratic, he added.

"Trying to prevent celebrations would simply cause more trouble for local authorities that it was worth," said Currie.

It's a point that highlights the extent to which Beijing has tried to calibrate a policy that tries to diminish the influence of the exiled Tibetan spiritual leader without inciting ordinary people into cyclical rioting that has been a feature of 70 years of rule by the Chinese Communist Party.

This policy has been a total failure, said Golog Jigme, an exiled Tibetan monk who managed a long and arduous escape to India in May 2014. In mid-February, he appeared in Berlin and met with members of Germany's parliament to warn of "appalling Chinese policies in Tibet."

The reason he decided to flee — thereby creating yet another propaganda disaster for Beijing — was straightforward: Chinese military raided his monastery in Qinghai province, smashing and burning images of the Dalai Lama, he said.

"After each and every experience of these crackdowns there will be even bigger pictures of the Dalai Lama, even better frames and more beautiful portraits that we will hang on our walls," he added. "Because this really strengthens our determination to show that, actually, we are not afraid."