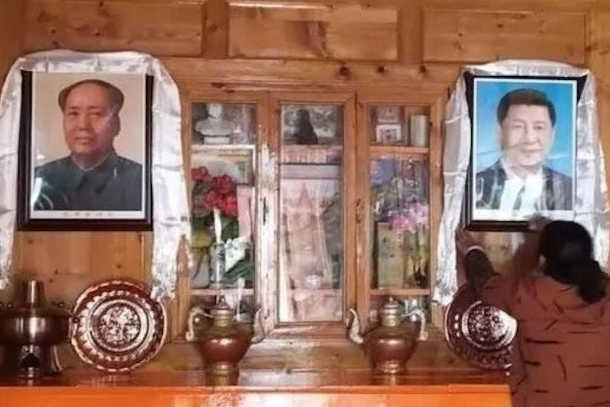 The Chinese Communist Party (CCP) has outlawed the worshipping of images of the Dalai Lama and is now forcing Tibetans to hang portraits of Chinese President Xi Jinping and CCP founder Mao Zedong on their walls. (Photo supplied)

The Chinese government is again restricting Tibetans from worshipping portraits of the Dalai Lama despite protests from scores of Tibetans who have died by self-immolation in demonstration against Beijing's "colonial rule" and its attempts to eradicate Tibetan culture.

But this time it is also mandating that Buddhist temples and monasteries remove his image and hang up pictures of President Xi Jinping and Chinese Communist Party (CCP) founder Mao Zedong instead.

Authorities in Hezuo City of Amdo County in the Tibet Autonomous Region issued a notice in December 2018 requesting 38 village committees, eight community resident committees and 249 (resident) villager groups in four subdistrict offices and six townships across the city to "clean up" images of the Dalai Lama — a euphemistic way of telling them to tear the images down, starting with those in public view at places of worship — and hang up portraits of Mao and Xi instead.

The strongly worded notice ordered the village entities to adopt a serious approach to setting up regulations and a system to "constantly control and frequently monitor" the use of such portraits. It also demanded they establish a registry record to assess how the operation is going.

Township party committees were instructed to "organize the key responsible persons of all villages, department units and monasteries, as well as cadres and workers in townships, to hold special meetings for mobilizing people to remove all portraits of the Dalai Lama, and to specially arrange and assign the specific clean up work."

"All comrades, leaders and cadres in charge of certain regions, villages and temples are required to improve their political positions, understanding the far-reaching significance of this work and clarifying the goals of the tasks at hand," the order stated.

Zuigedo Township is one example of a local authority that has pounced on these directives with gusto, which it said it was doing in line with "the spirit of the 19th National Congress of the CCP and Xi Jinping's new era of socialism with Chinese characteristics."

Local officials said "the party must manage the party" and safeguard social stability, the socialist legal system and the fundamental interests of the people.

"While removing all portraits of the Dalai Lama, it is necessary that images of party leaders must be hung up together," a local official said, also referring to the ban in a light-handed way as a "clean-up campaign."

The township's media office confirmed that images showing the exiled leader of Tibetan Buddhism had already been removed from four Buddhist temples in two monasteries, six Mani houses and the homes of village group cadres and some party members.

These have all been removed from sight and replaced with pictures of Xi, Mao and other Communist Party figureheads, it said.

Local herdsmen are following suit by changing the framed images gracing the walls of their homes to make them more politically correct, it added.

"We will further consolidate the effectiveness of the campaign and form a long-term management mechanism to frequently control and constantly monitor the situation," a representative from the office said.

In other words, party cadres will keep checking to see if anyone violates the order as they scout for possible threats to the CCP's rule, and hunt for ammunition against any perceived dissidents, or "splittists" to use party jargon.

With this latest movement, the CCP has again resorted to Cultural Revolution-style tactics as it wants to rid the land, and presumably people's consciousness, of thoughts and images of the Dalai Lama.

This not only tramples on the rights of Tibetans, notably their freedom of religious belief, but also intensifies their conflicts with the party.

Observers are concerned the CCP will not only ban the Dalai Lama's portraits in religious places such as monasteries but also force Tibetans to hang the images of party leaders, both past and present, in their own homes.

Not that the suppression of Tibet's religious identity is anything new: Beijing's clampdown on the region began decades ago.

When similar campaigns were first launched, monasteries and households were raided and searched without any hint of a warrant or legal support. The searches were often conducted arbitrarily and with impunity, despite being in violation of the CCP's own laws.

Tibetans responded with boycotts that drew the support of monks. Clashes with Chinese security forces were not uncommon and blood was spilled.

Tibetan activist and poet Woeser summed this up effectively in an article she penned titled "Images of Leaders."

"There is a hidden implication: we liberate you and give you a new life, so you must show your gratitude, loyalty and obedience in your words and deeds," she wrote.

The party claims the campaign aims to "educate and guide people in the farmland and pasture villages to determinedly maintain the socialist road with Chinese characteristics and enhance their national awareness."

However, overseas Tibetans have expressed concern that "these acts will cause strong resistance from local Tibetans and lead to more crackdowns and killings" because for many Tibetans the campaign is an insult to their religious beliefs, traditions and culture. It also suggests local authorities are stoking conflict between Tibetans and the party.