Reflections on a year when Beijing's crackdown got so bad Tibetans set themselves ablaze, holy temple up in smoke 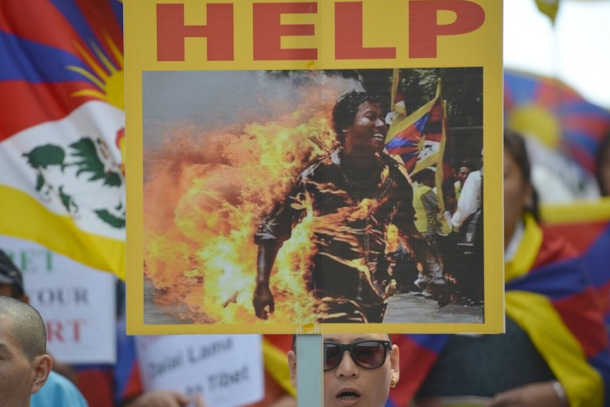 A protester holds up a banner showing Tibetan exile Janphel Yeshi, 27, engulfed in flames after he set himself on fire during a protest in New Delhi in 2012, during a rally to mark the 57th Tibetan National Uprising Day at Martin Place in Sydney in this March 10, 2016 file photo. (Photo by Peter Parks/AFP)

At the end of the year, or the start of a new one, people love to reflect on what transpired over the preceding 12 months, and it seems fitting that such a tribute be paid to Tibet as it prepares to celebrate the Tibetan New Year.

Known as Losar, Feb. 5 marks the first day of the lunisolar Tibetan calendar and is marked by singing, dancing, chanting, and the acting out of ancient ceremonies to mark the interplay of good and evil, among other rites and rituals.

But what I find as I look back over the past year is a period of profound grief for Tibetans, and this grief is linked to "fire."

On Feb. 17, 2018, just two days after the new year began, our holy Jokhang Temple (known as the Dazhao Monastery in Chinese) in the Tibetan capital of Lhasa was swallowed by a raging fire.

A video on social media shows several parts of the temple — recognized by UNESCO as a World Cultural Heritage site — engulfed in flames. See one clip below:

Local Tibetans and those living outside the "Chinese province" were shocked as the temple is cherished by Tibetans and serves as the home of our most respected Buddha statue.

In fact, Tibetans are willing to spend all of their wealth in order to worship the holy statue just once in their lifetime.

However, the Chinese Communist Party (CCP), which has been working to suppress Tibetan culture and religion, has never provided an explanation for what caused the fire.

Moreover, the government started its "investigation" into what happened by first removing all relevant information pertaining to the temple and the fire from both online and offline outlets.

Authorities also told Tibetans not to spread "fake news" about its cause, which it warned would be illegal.

Furthermore, the government deployed personnel to eliminate talk about the blaze online in both Chinese and Tibetan.

While Chinese officials remained silent about this tragic occurrence, foreign and social media started to cover it, forcing the Tibet Daily, a government mouthpiece, to also write articles about what happened.

Yet its "story" was brief, to say the least, extending to no more than 60 words. It announced that a fire had broken out at the temple at 6.40 p.m. on Feb. 17, and explained how local party officials had dealt with it.

Watch another video of the fire below:

The following day, the CCP reopened the temple and let believers enter.

But pilgrims reported that, while the revered statue of the Sakyamuni Buddha (known as Jowo Sakyamuni in Tibetan) was still in place, they were not allowed to worship it from up close, as had been the practice before.

Instead, they had to view it from a distance. Meanwhile, the second and third floors of the main palace were also off-limits for worshippers.

The temple was closed again within days. On Feb. 22, a video surfaced online showing black sewage being discharged from its front door.

China's official Xinhua News Agency released a report that same day stating that, "a fire broke out in the right ventilating chamber on the second floor of the rear palace where the statue of the Sakyamuni Buddha is enshrined at Jokhang Temple in Lhasa."

However, there is no "rear palace" inside the temple, except for the main palace.

The CCP's story was full of holes and contradictions. The official media consistently said the building was "intact" and had not suffered any losses.

But the fact of the matter is that a fire broke out in a 1,360-year-old wooden building and burned for over an hour. How could there possibly be no damage or losses incurred?

If this were true, would it not constitute a modern-day miracle? Who would believe it?

Moreover, the video shows the on-site personnel to be lacking in any proper fire-fighting equipment as they floundered around, hopelessly lost as to what to do.

Now Tibetans say, somewhat sarcastically, that Lhasa lacks fire-fighting teams but it has plenty of killing teams. Moreover, they joke that the speed of China's firefighters cannot be compared to the "speed" with which the military police suppress local Tibetans. This photo taken on Dec. 26, 2018, shows a wall covered with portraits of young Tibetans who self-immolated in protest against Chinese rule in Tibet, at the Tibet Museum in McLeod Ganj in Himachal Pradesh state. The number of protesting Tibetans who died after setting themselves on fire has reached 155 since 2009. (Photo by Laurène Becquart/AFP)

Soon after the fire came the Tibetan self-immolation protests.

He felt so strongly about the need to protest against what the Chinese government was doing that he left behind a wife and two daughters.

On Nov. 4, a 23-year-old man named Dorbe followed suit in Amod of Ngaba county. Before his life was snuffed out he shouted: "May the Dalai Lama live long! May we soon behold his golden countenance!"

And a month later on Dec. 9, a monk known as Choekyi Gyatso (his secular name was Drugkho), 16, set himself on fire, also in Ngaba, as he shouted, "Long live the Dalai Lama" and "Let's resolve Tibet's problems!" According to overseas media, 70 percent of Drugkho's body was covered in burns. However, no more information about him was made available.

Tibetans have been consumed by grief and sorrow at the deaths of these three men. Since 2009, the total number of Tibetans who have self-immolated in protest has reached 155, despite Beijing's efforts to silence the populace and restrict our religious freedom.

Those who have doused themselves in gasoline and struck that final match include herders and farmers, monks and nuns, men and women, fathers and mothers.

In terms of numbers, it is the largest known example of protest by self-immolation in human history.

This has "exposed the brutal, barbarian and inhuman policies implemented by the Chinese government in Tibet for decades; the self-immolation protests were caused by the repressive policies of the state," the Tibetan Center for Human Rights and Democracy said in response.

Some of those who sacrificed their lives for this cause were born in in the 1990s, after China's famous period of reform and opening up to the outside world.

They never experienced the fiery days of the CCP's most violent persecution in Tibet, so why did they choose to lay down their lives in protest?

The soon-to-end Tibetan year was certainly full of heartache and sorrow, as fires raged inside people's hearts and consumed their bodies in protest against the occupying Chinese.

As such, I have just one wish for the coming year: That Tibetans suffer less in 2019, and not a single life is lost in the flames of protest.