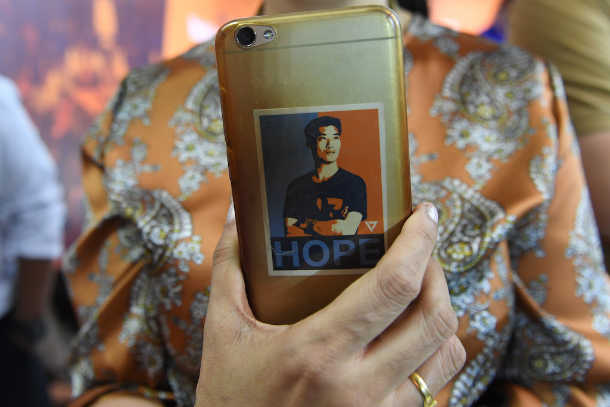 A woman holds a mobile phone decorated with a sticker featuring an image of Future Forward Party leader Thanathorn Juangroongruangkit during the party's press conference in Bangkok on March 25 after Thailand's general election. (Photo by AFP)

By Will Summers*, Bangkok

Confusion reigns following Thailand’s March 24 election whose official results are yet to be announced. These results may be delayed due to the annual Songkran holiday and the coronation of King Vajiralongkorn.

Even so, the lack of official results has not stopped pundits from analyzing the preliminary results, with some suggesting that the numbers confirmed the military’s power, while others argue that the elections prove the rise of a new force in Thai politics.

What they seem to ignore is that, if looked at closely, even the preliminary results suggest that the voters have hardly given a ringing endorsement to any party, especially if compared with historic results. In fact, apart from some prominent parties that were clearly punished, the voters appear to be sending out mixed signals.

Most prominent among those punished were the Democrats, formerly led by the Oxford-educated and former prime minister Abhisit Vejjajiva, who had presided over a great period of unrest that saw the collapse of an ASEAN summit in 2009 and the red shirt protests in Bangkok in 2010.

The lackluster performance of that government may have played a role in the dire performance in this election, but it was more the fact that the Democrats never expressed an inspiring policy or had a clear stand on any issue during the campaign, ruling out coalition deals with every party even before the election was held. Thus, those opposed to the Pheu Thai Party turned to the military-supporting Palang Pracharat instead, while those who traditionally supported Pheu Thai had no reason to switch to the Democrats. It was unsurprising to see the party lose all its seats in Bangkok as well as seats in its southern stronghold.

In the light of this dismal performance, Abhisit’s post-election resignation as party leader has reopened the way for the Democrats’ leadership to seek an alliance based on hard-nosed pragmatism rather than on some naive Westminster-esque idealism.

Even so, the party faces a serious quandary in its choice of partners. In terms of policies, the natural partnership would appear to be Palang Pracharat, especially when it comes to opposing pro-Thaksin parties. However, from an ideological perspective, the party may be able to rehabilitate its image as a pro-democracy party by aligning with the so-called pro-democracy coalition, headed by Pheu Thai.

Both these alliances pose long-term problems. Alignment with the military will cement the Democrats’ reputation as a military-supporting party, while an alliance with Pheu Thai will mean that the party may lose its anti-Thaksin support base forever, with no real gains in exchange.

At the same time, the youth wing of the party (the New Dems), most notably under Prit Watcharasindhu, Abhisit’s Oxford-educated nephew, appears to still be wrapped in idealism and is advocating the role of a free opposition for the party. While this is a principled move, it may well mean the doom of this venerable party as it will neither be unable to deliver services to its constituencies nor serve as an effective opposition on its own.

Meanwhile, some commentators suggest that Pheu Thai, seen as a proxy for Thaksin Shinawatra, the self-exiled former prime minister, was the clear winner of the election with its 137 seats, as opposed to the 116 seats of its closest rival. This claim does not bear scrutiny. Once upon a time, Thaksin could famously boast that he had been elected by 14 million voters. Yet, in this election, Pheu Thai only managed to rack up some 7.9 million votes, far lower than that of the last endorsed election in 2011, where it won 15.7 million, or 2007, when its previous incarnation, the People’s Power Party, won 26 million. These results suggest that while the party is still a political force, it is a force in decline.

Furthermore, while past Thaksin proxy parties were used to forming governments with minimal assistance from coalition partners, this time they will need to turn to a much wider array of coalition partners to make up the minimum 251 seats to form a government.

While some of these parties are “lifeboat” parties that were created as offshoots of Pheu Thai in case the main party is trapped by the net of detailed regulations and laws governing party activities, and so should not pose too many problems as political partners, others such as the new Future Forward Party may be more difficult to control. Thus, even if Pheu Thai manages to form a coalition government, it is likely to be far less stable than its previous governments.

Old wine in a new bottle

If Pheu Thai is weakening, its much feted replacement appears to be Future Forward, under the leadership of a young billionaire and former CEO of the Thai Summit Group, Thanathorn Juangroongruangkit.

Although it has often been touted in the Western press as a new, fresh and youthful force, Future Forward's image and snazzy marketing strategies cannot hide the fact that the Juangroongruangkit family is hardly new to Thai politics. Thanathorn’s uncle, Suriya Juangroongruangkit was transport minister from 2002 to 2005 under the Thaksin government. Although Thanathorn and his supporters have attempted to distance the party from those aligned with Thaksin, the excuses have never been convincing and will become even less so as the party aligns with Thaksin-backed parties.

The Western press has dwelt on Future Forward’s use of social media as a platform for its campaigning, but most outlets have overlooked the internal party disputes that have erupted in the same medium, most notably over the break-up of the New Gen Network and public bust-ups with overseas academics and party members over the party list.

Despite these controversies, the party appears to have performed unexpectedly well in the election, although closer examination reveals a more complex picture. In terms of constituency voting, Future Forward was a poor performer, winning only 30 seats. Ironically, most of its seats (as many as 59, if not more) will come from the party list system, as outlined in the constitution it has expressed a wish to amend. Presumably, if given the chance, this will be one section that they will not tamper with.

Equally unexpected was the performance of the also newly established Palang Pracharat Party, widely seen as the military’s party. Although many pundits have alleged that the military government rigged the election, and there are certainly some instances that bear further investigation, this election is hardly in the league of those territories where leaders enjoy a 99 percent endorsement from their electorates.

Moreover, historically, Thai voters are not averse to making their views known in post-coup elections, most notably in 2007. In light of these historical trends, Palang Pracharat has done surprisingly well, winning the popular vote comfortably with 8.4 million votes but placing second with 116 seats.

It is hardly a ringing endorsement, but neither is it a complete rejection of the status quo.

The devil and the deep blue sea

Given the choices, it is hardly surprising that Thai voters have rendered a mixed verdict. While the military government’s performance can hardly be termed stellar, it did deliver its promise of stability. While there were sporadic political protests, they never reached the extent of the red shirt protests of 2010 or the Bangkok Shutdown of 2013-14. Voting for Palang Pracharat may not be the most inspiring choice, but its stance appeared to be far clearer than that of the Democrats. Thus, for Palang Pracharat voters, national stability and keeping Thaksin out during this transitional period was the more important priority.

Naturally, there are some who will find this vision of stability to be stultifying. Yet they had very few truly inspiring choices to turn to. Pheu Thai’s policies have hardly diverged from the Thaksinomics of the 2000s. Indeed, most of the major parties have gone down the free-spending populist route whose long-term sustainability is debatable. However, unlike them, a Pheu Thai government may also lead to the return of the cycle of anti-Thaksin protests, coup and anti-coup protests that many Thais are now desperate to avoid.

Future Forward is untried and untested. Its leader has a different vision that sounds inspiring but may threaten to collide with reality. Furthermore, there are concerns about the party leadership’s ambiguous stance regarding the monarchy, which may make some wary of endorsing them and may attract the attention of lawsuits that may lead to the disqualification of some members or even party dissolution.

As the nation winds down for the annual long holiday and gears up for the coronation, it seems that voters are stuck with the same choice between stability that may be suffocating and a vision of progress that may turn out to be impractical and unsustainable. They may need to wait a while yet before they can find a viable third party that can steer the ship of state safely between the Scylla of stultifying stability and the Charybdis of radical progressivism.

*Will Summers is an alias used by the author who is a former diplomat and a long-time observer of Thai and international politics.