Indonesian soldiers attend a briefing at a military base in Papua in this file photo, (Photo: Bay Ismoyo/ AFP)

Eden Bebari, 20, a university student, and Roni Wandik, 23, were shot dead on April 13 while fishing at a lake, while Melki Maisini, a 16-year-old high school student, was shot on April 10 in a palm oil plantation.

The military and police claimed the three young men were members of a Papuan armed separatist group suspected of carrying out an attack last month on the offices of copper mining giant Freeport Indonesia, which operates nearby.

A New Zealand national was killed and two Indonesian employees were injured in the March 30 attack.

However, the victims' families denied the youths were members of an armed criminal group.

“Eden and Roni have never been associated with, let alone been members of, any such group,” Deminikus Bebari, Eden’s father, told reporters, adding that they were not wearing Morning Star bracelets when they went out fishing.

The Indonesian military has promised to investigate the shootings.

“We will establish an investigation team. We promise to get to the bottom of this,” Asaribab said. 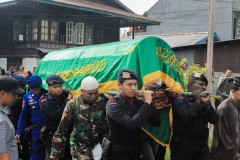 Waterpauw called on people not to venture into areas surrounding the Freeport mine area. “Sometimes, it is difficult for us to distinguish [innocent people] from the [rebel] group,” he said.

Security forces have often been criticized by rights groups for adopting a heavy-handed approach towards civilians when trying to deal with insurgents who want an independent Papua.

“[People] want an approach that puts forth human dignity in countering every problem in Papua,” Father Amo told UCA News on April 16.

The priest admitted that although there had been attempts at a softer approach towards Papuan people, “violence still happens.”

“The military chief should take firm action against those [soldiers] who commit violations and give justice to the victims’ families,” he said.

Reverend Sokratez Sofyan Yoman, head of the Baptist Church in Papua, said several shootings have occurred in the area since the military took over security duties around the Freeport mine in 2019. “None have been properly explained,” he said.