Three Spanish priests and their love for India In 1948 Father Peter Julio left Spain for India where he is now more popularly known as Swami Shilananda. (Photo by Laveena Francis)

With a flowing white beard, and saffron-colored clothes, Father Peter Julio looks just like a Hindu monk but the 91-year-old Spaniard Jesuit, and two of his companions, are among the post-Vatican II pioneers, who helped develop what modern day evangelization means in Asia.

"I had come with a mission to convert Indians and make them Christians," says Father Julio. "However after spending so many years with the people I realized, I cannot convert them but I can share the love of Christ with them," says the priest with conviction.

His colleagues — 90-year-od Father Fredrico Sopena Gucci and 86-year-old Father George Gispert Sauch — share the same belief that evolved from having worked in India for over six decades. Much of that time was about implementing the teachings of the Second Vatican Council.

Father Julio, more popularly known as Swami Shilananda, came to India in 1948, a year after Indian independence, and was ordained a priest in 1960. That was the time the church was just opening its windows for "aggiornamento" or updating itself to the modern world with the Second Vatican Council.

His companions also landed in India during the same decade. They came ready to convert non-believers during a time when the church held the view that there is no salvation outside the church. "I am a Christian and if you don't see Christ in me — It's of no use," says Father Fredrico Sopena Gucci. (Photo by Laveena Francis)

Both Father Sopena Gucci and Father Gispert Sauch arrived in 1949 but life in India has changed their vision. Their experiences, life and theologizing would later inspire a new genre of evangelization in India. 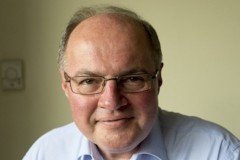 "I am a Christian and if you don't see Christ in me — It's of no use," says Father Sopena who is fondly known as baba, an honorific in South Asia meaning father or saintly person.

Father Sopena has traveled almost all over India and worked with the poor, especially the country's tribal people.

"Love them, eat with them, stay with them and for goodness sake do not preach. What you give them, they will forget, even the most sublime thing," says Father Sopena.

"But, they will not forget you, if they see Christ in you," he says while explaining his view on missionary work.

"Never convert anyone. Convert yourself and see everyone as your brother and sister. I have never converted anyone. I have converted myself for my people. I believe in the change of one's heart," says Father Sopena.

"I learnt more in the years I spent living with people, than my years of theology. Don't ever preach," he says.

"The priest has to tell them he is a sinner and in need like everybody else, but he knows a little more than the average person about scripture reading and how that touches the people."

With other aged Jesuits, Father Sopena lives in Vinayalaya (house of humility), a Jesuit home in Mumbai.

Father Sopena wants to live and die in India, he says with a smile. What attracts him most is the people, and "the love and respect they give," he says.

"Mera Bharat mahan!" he exclaims in Hindi, which means — my India is great! Father George Gispert Sauch has spent most of his time in India teaching theology. (Photo by Laveena Francis)

His colleague Father Gispert, a Sanskrit scholar, spent most of his years teaching theology. This gave him further insights into Hindu scriptures and on how Asian thought and culture could be incorporated into theologizing across the region.

"The start wasn't easy but I was eager to learn and I did my degrees in theology and Sanskrit," says Father Gispert, who spent several years teaching at Vidyajyoti College of Theology in New Delhi.

Highly intellectual and very soft-spoken, Father Gispert spent almost all of his years as an educator. He still holds a Spanish passport but nonetheless exclaims, "I am an Indian by heart. I love India and I would want to remain here only."

His books such as Bliss in the Upanishads and co-authored books like Christianity in India and Theologizing in India are highly acclaimed sources.

He co-authored books with Indian theologians, such as Fathers Michael A. Amaldoss and T. K. John and Soosai Arokiasamy, which explored new methods of evangelization that would accept the positive elements of the majority Hindu culture.

Accept what is good

Father Julio separately put in practice the acceptance of goodness in Hindu culture some years after his ordination. He adopted the dress of an Indian monk and began to live outside the Jesuit community in a rented space in Panchavati in the west of Maharashtra state. That area is religiously important as it is named in Ramayana mythology as the forest home of the Hindu lord and his wife Sita during their exile.

After 14 years in Panchavati, Father Julio moved to the outskirts of Sinnar, which he continues to visit.

"I have many non-Christian friends, even sadhus [Hindu monks]. Many Hindus come there," he says.

He spoke about a Hindu who attends Mass each Monday but refrains from taking Communion since he is not baptized.

"He knows all our prayers and he even reads the Bible but there are so many Catholics who just come to the church and take Communion, without even realizing its importance," he says.

The three Spaniards say they fell in love with India and its people. All of them are full of smiles and tranquility when talking about their past and achievements.

The three priests may no longer be active in mission, but the hundreds of Christian missioners that they have inspired now work throughout India, continuing the traits of evangelization that they pioneered.