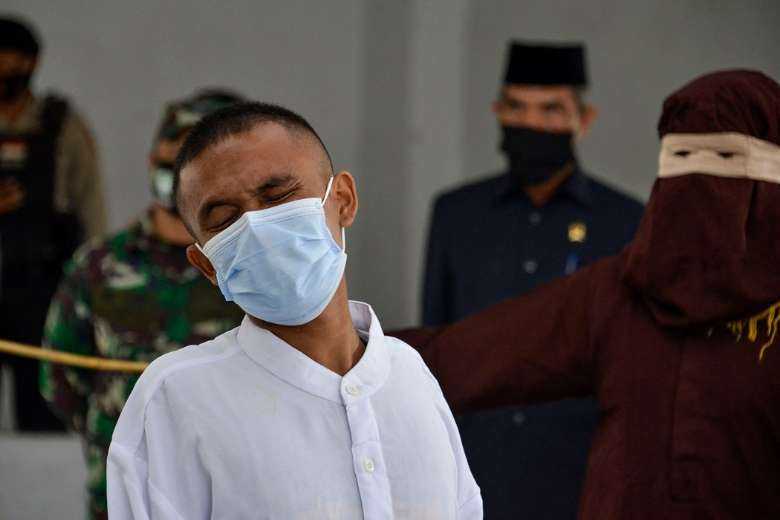 A Christian man reacts while being publicly caned by a member of the Sharia police after he was caught drinking alcohol in Banda Aceh on Feb. 8. (Photo: Chaideer Mahyuddin/AFP)

Three Christians were flogged in public in Indonesia’s Aceh province on Feb. 8 after being caught drinking alcohol at a small shop in the provincial capital Banda Aceh, according to a local government official.

It was not clear whether any of the men were Catholic.

“They were all given the choice of a prison sentence or caning, and all chose to be caned,” he said.

The conservative province is the only area in the country allowed to implement Sharia-based bylaws.

They stipulate that violators must be given the option of being tried in a Sharia court or in a regular criminal court using Indonesia’s national penal code. However, if the offense does not fall under the penal code, even non-Muslim violators can be tried under Sharia law.

One of the caned Christians said he chose to be flogged to avoid a prison sentence of up to six months.

“I would have had to stay behind bars for a long time. I thought it better to get it over and done with,” he said, adding he would not wish to go through it again.

Each stroke was excruciating,” local news portal sindonews.com reported him a saying.

He said they were given a choice and they chose to be flogged but he criticized a law that meted out such punishment.

The floggings were not the first inflicted on Christians in Aceh.

In April 2016, Remita Sinaga, a 60-year-old member of the Batak Protestant Church, received 28 strokes of a rattan cane in Central Aceh district after being found guilty of selling alcohol.

Five other Christians have been flogged since then for alcohol and gambling offenses.