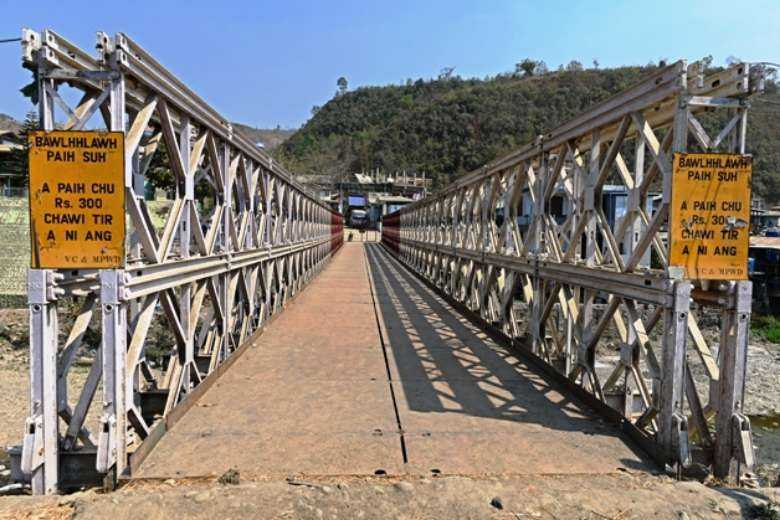 Myanmar's side of a bridge built over the River Tiau, a natural border between India and Myanmar at Zokhawthar in the northeastern state of Mizoram. (Photo: AFP)

Three people including a Myanmar national, suspected to be a cadre of the rebel Chin National Army (CNA), were arrested by Indian security forces while allegedly attempting to smuggle a huge cache of explosives and other contraband in Mizoram.

Those arrested were identified as Sangkima of the CNA, M.C. Lallungrualpuia and Lal Thengliana, local Indians who are members of the native Lai tribe.

The contraband seized from them included 2,500 kilograms of gelatin sticks and 4,500 meters of detonating fuse, detonators and Indian and Myanmar currency worth US$1,500, officials added.

They suspect the contraband may have originated from Kanpur in the northern state of Uttar Pradesh and was allegedly being transported to a destination in Myanmar to arm CNA militants.

The state capital of Aizawl with a total population of some 370,000 reportedly has over 6,000 Myanmar people who fled their country.

There is a need for extra vigilance as Manipur will be holding polls on Feb. 27 and March 3

One died while the other three had to undergo surgery to remove shrapnel from their bodies. They are in a private hospital in Mizoram’s state capital Aizawl, the social worker added.

Indian security forces have intensified security along the Indo-Myanmar border, especially Mizoram and Manipur. “There is a need for extra vigilance as Manipur will be holding polls on Feb. 27 and March 3,” an official source said.

As the Myanmar military's crackdown on pro-democracy demonstrators and rebel groups gained momentum in recent months, an estimated 18,000 to 20,000 Myanmar people have reportedly sneaked into Mizoram, where they share an ethnic bond and dialects with the locals.

Most of them have not been officially recognized by the Indian federal government as refugees, although they share an ethnic affinity and family relations with Mizos while also being Methodist Christians.

The Mizoram Kohhran Hruaitute Committee, a body of various church denominations, organizes special prayer sessions for the return of democracy in Myanmar.