Four-day gathering marks arrrival of Catholicism to the region in 1905, prepares young for Indonesia Youth Day 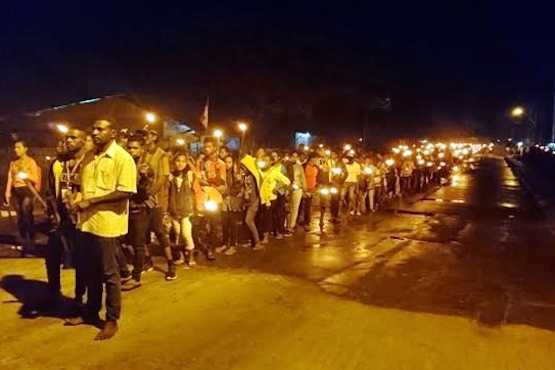 Catholic youths in Merauke district gathered in Wendu village to remember the beginning of Catholicism in southern part of Papua. The four-day event ended on Aug. 14. (Photo by Eman Riberu)

Some 2,000 young Catholics gathered in Wendu village in Merauke for a four-day event to remember the first evangelizing mission in the Papua region by the Missionaries of the Sacred Heart of Jesus.

"It was to improve their faith and share the responsibilities of young people in social development," said Beatha Kandam, head of the youth commission of Merauke Archdiocese.

The event, which ended on Aug. 14, was also used to prepare Papuan youths for Indonesia Youth Day to be held in Manado, North Sulawesi in October this year.

The young people also reflected on the theme of the upcoming youth day, "Biblical joy in Indonesia’s diverse communities."

"They built the first church in Wendu village," Archbishop Saputra told the gathering before encouraging everyone to continue the spirit of the first missioners and build cooperation between the church and government.

It’s because it was the site of the first church that Wendu village was chosen to host the event.

Throughout the event the archdiocese encouraged attendees to keep up their spiritual lives and avoid crime, drugs and alcohol. "They were also motivated to take part in economic development," said Kandam.

Jack Renyaan, a youth leader from St. Theresa Church, said the gathering instilled positive values, particularly boosting a spirit of service to others and involvement in the development of the church and nation.

"Here, young Catholics reflect on and learn that the first evangelization of southern Papua [began] a new civilization," said Renyaan.

"Young people must continue the spirit of God’s love," he continued and added that it’s important for young Catholics to build friendships and live in harmony.

Meanwhile, Daniel Pauta, a government official from Merauke district, said that the local government made Aug. 14 a public holiday in 2011 and supports the church’s mission.

"It was declared a public holiday because Merauke is the gateway of the Sacred Heart of Jesus in the southern Papua region," he said.