Activists urge govt to pass legislation, formalize an end to decades of war 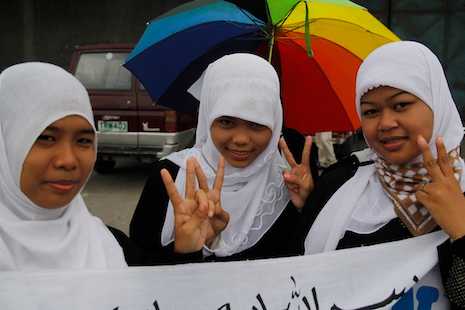 Some 20,000 people held a pro-peace rally in the southern Philippine city of Cotabato on Thursday to call for the immediate passage of legislation that will formalize the peace process in Mindanao and end almost four decades of Moro rebellion.

The Philippine Congress last week suspended discussion of the proposed legislation after at least 67 people, 44 of whom were police commandos, died in a bungled raid against suspected terrorists in the town of Mamasapano on January 25.

"The law is our only hope for genuine and lasting peace not only in Mindanao but in the country," said Professor Raby Angkal, spokesman of the Mindanao Alliance for Peace.

"Please pass the [Bangsamoro Basci Law] BBL now. It has nothing to do with what happened in Mamasapano," said Hadji Mohammad Halil, head of the Bangsamoro Civil Society Organization in Cotabato.

"That is a path we will no longer return to, where we all lose, where we are all victims," he said. "For us there is no other option except the option of peace," Iqbal added.

The rebels were scheduled to start disarming at the start of this year under the peace treaty.

During a Senate inquiry on Thursday, Iqbal appealed to the government not let the January 25 incident derail years of peace negotiations.

"Let us be partners for peace," Iqbal said.

In the cities of Marawi and Davao, peace activists also condemned calls for war, saying the passage of the BBL "is the only solution for lasting peace."

"We sympathize with those who perished in Mamasapano, but we should not make it a reason to abandon the peace process, abandon the BBL, and make millions more including helpless children, orphans, women and elderly suffer from the horrors of another all-out war," said Ustadz Mauladdin Sagapan.