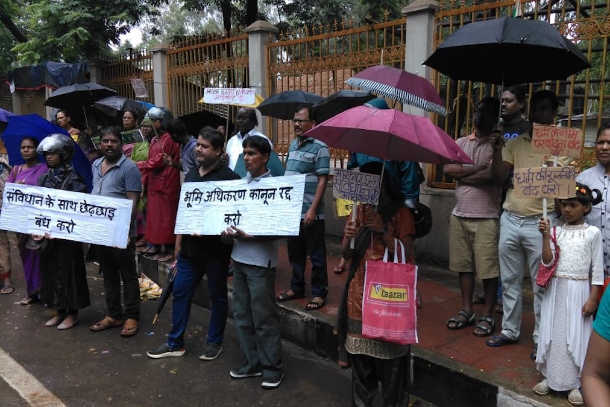 About 10,000 Christians in eastern India's Jharkhand state formed a 20-kilometer human chain to protest what they call the state-sponsored harassment of Christians and a hate campaign against them.

The mostly indigenous Christians say their government, run by the pro-Hindu Bharatiya Janata Party (BJP), has developed policies to take away their rights and land.

Braving heavy rain on July 15, women, children and elderly from different churches joined the human chain after their Sunday services.

"Catholic nuns, priests, pastors are attacked and jailed. Their institutions are searched. They are accused of every wrong that takes place in the state," said organizer Prabhakar Tirkey, president of ecumenical Christian forum Rashtriya Isai Mahasangh.

Christians are angry about the recent detention of a Missionaries of Charity nun on charges of child trafficking. The arrest came after a childless couple complained that a staff member at a home for unmarried mothers took money for providing a baby but failed to keep her promise.

Jesuit Father Alphonse Aind, principal of a school in a remote village, was arrested and remanded on June 22 on charges of abetting rape after unidentified people kidnapped five social activists who staged a street play in his school that allegedly criticized tribal demands for autonomy.

Christian leaders say the arrests are part of a state-sponsored hate campaign to project Christians and missioners as law breakers and tarnish their institutions.

"It is part of an organized to plan to keep ordinary people away from Christian institutions and missionaries," Tirkey said.

Ever since the BJP came to power in Jharkhand in 2014, Hindu groups have been accusing Christians of engaging in illegal conversions of socially poor Dalit and indigenous people, he said.

A year ago, the state enacted a law that makes changing religion a crime punishable with jail if done without informing the government, Tirkey said.

The government has tried to amend two state laws by removing clauses to protect the land rights of indigenous people, whose leaders suspect the move aimed to transfer their land to mining companies.

It also faced opposition for amending a five-year-old federal law that aims to protect the rights of farmers and indigenous people when the government acquires their land for development.

"The government comes with one move or another against Christians and tribal people. Unless this is opposed, it will gradually perish the tribal community," Kujur said.

Ajay Tirkey, president of the Central Sarna Committee, said it has been demanding official status for the Sarna religion "so that we can have independent identity."

The Sarna people are now counted as Hindus in the official census.

Jharkhand has about 32 million people, of whom one million are Christians, almost all of them tribal people.